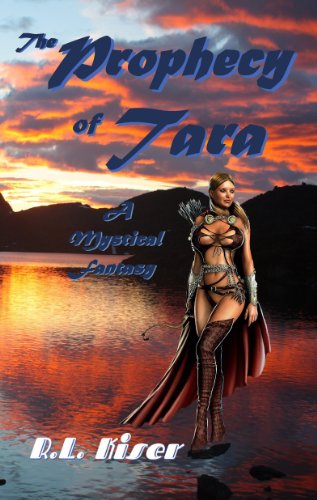 Book: The Prophecy of Tara by R.L. Kiser

about this book: A young girl with special abilities is trained from childhood by monks for a special task in a remote location. Now flowering into womanhood she is strong, sexy, without guile, and possessed of martial fighting abilities beyond those of most men. And she is outgrowing her scanty lizardskin armor, which reveals a little too much.

Eons ago a great power arose to corrupt the world. It could not be destroyed and so was split into pieces and scattered by these very monks. Now it has arisen again, as foretold in a prophecy, and corrupted a powerful northern family. The monks cannot interfere so they've trained and tasked Tara to take special knowledge across hostile land to a wizard in the west. Her journey is a perilous one, but she is joined by a disparate group, a stranded star traveler with a laser sword, an intelligent giant from the north, an ancient warrior from the time before, and others. There are powerful forces that would see to her undoing, including an invincible Shadow Dancer.

This is the story of her intriguing journey and encounter with some of the most interesting and dangerous people on the planet.

• I really liked this book, the characters are charismatic and their banter is humorous. I enjoyed the magical elements and the hints at a greater history. -- Patricia Hamill

• It's such a wild adventure, a book that would satisfy fantasy and adventure fans alike – it's action-packed and a fast read. -- Lit Amri for Readers' Favorite