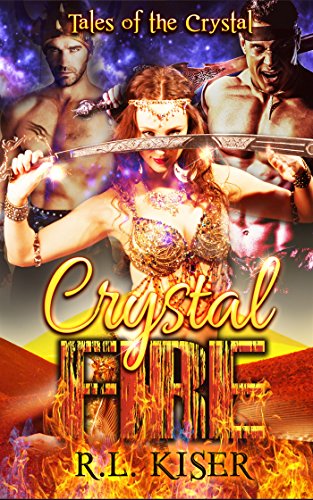 about this book: Eons ago magic users were unguided and undisciplined. There were those that applied magic intelligently, those that were unscrupulous, and worst of all, the amateurs. Magic ran rampant in the land. Those pure of heart came together to form a standard of discipline, they formed The Crystal into which the hearts, minds, and souls of hundreds, eventually thousands, gave their special talents.

Those powerful from the beginning, corrupted by the black arts, coveted the power of The Crystal and would try again to posses it, their previous attempt thwarted. But that battle used powers beyond control and the effects were devastating. Crystal Warriors, scarred by that battle, were scattered throughout the land.

But now the call goes out for their return, The Crystal is under attack, the need is urgent. Principal among those Crystal Warriors are Tarina, known as Awiel of the Dance, a beautiful veil dancer, Crystal Seeress, and wicked with a blade, far away in the southern lands.

Rowan, former Captain, psychically scarred, hiding far away in a place where there is little magic, disguised as an old man selling firewood.

Macon, a once powerful Crystal Warrior, now a drunken sot.

They and many others are forever attuned to The Crystal and hear its call. They must heed the call and travel thousands of perilous miles to do battle with overwhelming forces. An epic tale of magic and warriors, but more importantly, of flawed human beings overcoming adversity and personal demons to do what must be done.

• I was intrigued with the story from the very beginning… R.L. Kiser has written chapter one so deftly to reel in readers' curiosity to keep reading. — Lit Amri for Readers' Favorite