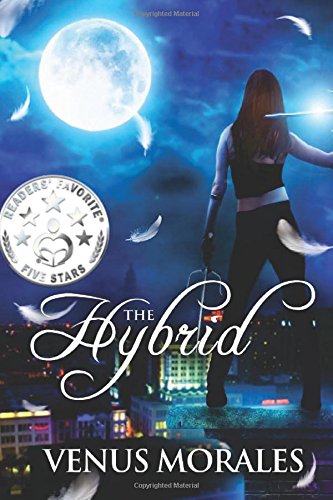 Book: The Hybrid (The Hybrid Series Book 1) by Venus Morales

about this book: My book is for anyone who loves Fantasy/Urban Fantasy novels. I've been writing for several years, most have been part time. Now I am able to write full time now that my children are getting older and I have more time to dedicate to my writing. I wrote this book in this particular way with these complicated characters for a reason. I didn't want to write just a normal mythology book or just a angel vs demon book. I wanted to mix them all up and have them conflicted and mashed up in one modern world where they all do-exsisted together, where there was no black and white. Traditional rules are broken from the ordinary books we read. I created a new species of demons for this new day in age because nothing is as it seems. Especially since it takes place in the heart of paranormal (New Orleans) is considered their New York. So much happens in one book that it all can't finish in one book. It the start of a series. The book is about the daughter of Ares, the God of war. Arielis, is the daughter of Ares, raised in secrecy until her 18th birthday, when her father is summoned back to Olympus. Arielis, ventures out into the mortal realm where she meets the archangel Julius, who bears a message from a seer.

Arielis, returns to her late mother's coven to regain her family crown. Littles does Arielis know she is fighting for more than the crown, she is also fighting for her life; fighting against the inner darkness within her.

With 7 days to prepare for her trials, and 7 days to fight for her life, Ari does the one thing she knows she must do to survive; she forges herself into the weapon she was born to be.

Video: The Hybrid on #IndieBooksBeSeen