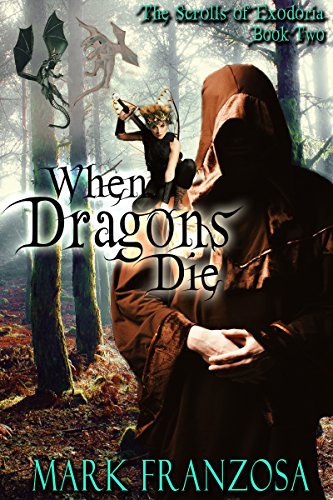 Book: When Dragons Die (The Scrolls of Exodoria Book 2) by Mark Franzosa

about this book: It's been a hundred years since the human city of Allew was lost to an orc attack. Nothing has been heard from Sart or Selene since that time, they have stayed out of the affairs of the West...until now.

When the Selart Empire sends out an orc fleet, the Western Continent will need to resolve their problems and stand together in the face of the biggest threat to their existence that they've ever known.

Can Kit, a shipwrecked human mage, successfully gain the help of the Fae Kingdom, protect an ancient artifact, uncover traitors, and defend his city from an orc onslaught? The fate of the planet of Exodoria stands in the balance, can he tip the scales in their favor, or will the world be brought to the brink of destruction? Find out what happens When Dragons Die.

A note from the author: I'm a big fan of fantasy and RPG's. I've looked all over for books that give me the grand scope of exploration and adventure like an RPG game, with little success. My hope for this series is to bring that sense of adventure to you, so you don't have to fruitlessly search and only find empty treasure chests. I hope I've succeeded in my attempts thus far. I'm busy working on the final book in the trilogy, until it is completed please let me know how you like the series so far! Visit my pages and drop me a line.