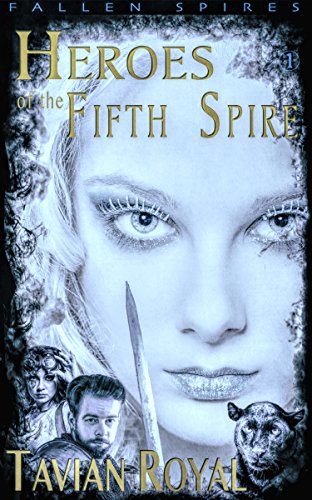 about this book: Heroes of the Fifth Spire takes place in a fantasy world immersed in an age of a magical renaissance. A great empire spans the realm filling cities with factories to create the materials needed for airships, trains and powerful weapons. Powerful beings known as lords protect the realm from outside threats such as demons and dragons.

Despite these great works and powers, a magical sickness is infecting the people and turning them into powerful monsters. Drunk with power and vengeance, these corrupted monsters leave a trail of death and destruction. No one knows how it is transmitted or who is infected. With the help of a witch and twelve lords and barons, the empire tried to use the Fifth Spire, one of twenty-four spires at the center of the realm, to cure the people. Instead, the witch, Lady Enix, betrayed them and tried to open a portal to the Nine Hells. The twelve lords stopped her plan and banished her.

Ten years later, she has returned from her imprisonment and is seeking revenge against the twelve lords while trying to reopen the portal to the Nine Hells. To stop her, a brilliant inventor creates a magical being named Monty. Before Lady Enix's agents can destroy Monty, she escapes and embarks on a journey to discover her destiny and save the realm.