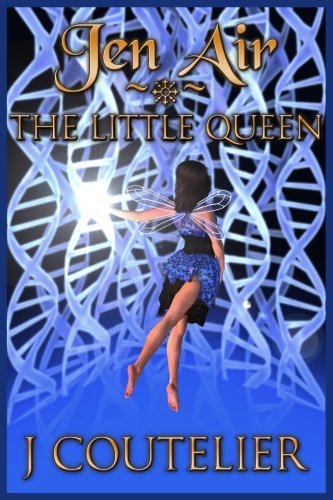 about this book: The Little Queen is a story about growing up and friendship, and maniacal faery-like creatures trying to gouge people's eyes out just for looking at them. But it also deals with some wider ranging issues, such as scientists often having the best intentions, wanting to explore, gain a greater understanding of nature, and perhaps along the way enrich and improve the lives of everyone… but those ideals are often corrupted by corporations seeking only profit and to bind and shackle the lives of ordinary folk to them.

It is, in a sense, a love letter to all the fantasy and science fiction tales I enjoyed while growing up, and so is written with my teenage self in mind. Having dabbled a little in writing short stories over the last couple of decades, I finally drew on the bank of characters and story ideas I've developed into an exciting tale. It's also semi-autobiographical, with the main character, Jennifer Airhart, having had a wonderful childhood but then miserable teenage years. But now, with some old and new friends by her side, things will hopefully keep getting better.

The writing actually came pretty easily, for a change, at least after the first few chapters. The hardest parts were the beginning, and then later having to trim and cut some scenes out altogether in order to keep the word count down to a standard novel length. Hopefully, however, I will get to reuse some of what was cut in future stories. I try to research every detail I possibly can while writing, such as the relatively new field of synthetic biology, or the myth and folklore surrounding changelings and faeries. But also bombs, weapons, how to make knockout gas… hopefully I won't have triggered any security warnings and will get to write future stories.

The Little Queen does contain some elements that you would find in a horror story, but it's not horror. Remember that the more you investigate, the more you increase your knowledge and understanding, the less scary things become. Above all, enjoy and have fun.