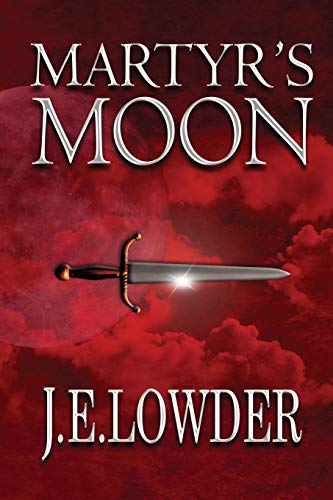 about this book: Martyr's Moon, Book II in the War of Whispers series, starts right where Tears of Min Brock ends. Elbea and Romlin must risk their lives to find out if the land of Claire is real or just a mirage. And as they wrestle with their decision, the two whispers battle for their allegiance. And like before, they must decide which offers life and which leads to death.

As war looms between the nation of Ebon and the refugees from Allsbruth, myths arise about the castle of Min Brock being rebuilt as well as a warrior known as the Gor King prowling the lands. But when a Martyr's Moon rises, signaling to all that a storyteller's blood has been spilled, the hopes of the Allsbruthians is dashed.

And yet, a whispers calls in the night and the War of Whispers rages on.

• "Tears of Min Brock is a heartfelt story of epic proportions with two lovable characters. It is an epic in every sense." — Sift Book Reviews

• "If you are a fan of magic and hope, as well as fierce, epic battles between good and evil, you will love this work." — Tic Toc Review

Video 1: Storyteller J.E. Lowder
Video 2: A quick look into the inspiration for writing the epic fantasy series, War of Whispers