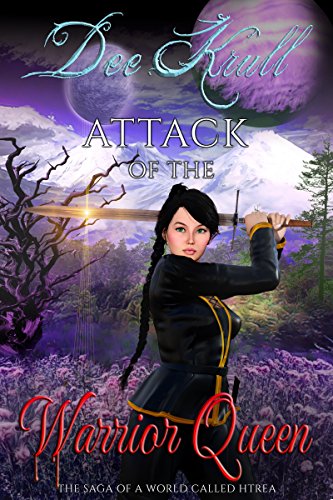 Book: Attack of the Warrior Queeen - The Saga of a World Called Htrae by Dee Krull

about this book: Book four "Attack of the Warrior Queen," in this series: "The Saga of a World Called Htrae,' was an emotional rollercoaster for me and my characters. I always know I have written well when I find myself crying as I write. My two main characters Laurel and Learden are torn apart, not once, or twice but three times during the course of the story. The new characters that were created as I wrote this part of the series became so important to the plight of this planet that another book became a given. This is a character driven novel. When I sit down to write I am not sure where they will lead me until everything flows and a new chapter begins.

After writing the first book, "Dreams and Vampires" I realized I was hooked. I was used to writing nonfiction about my profession as a Clinical Hypnotherapist. But when I realized how much fun it was to write fiction I knew the second book would be even better than the first and so on. If you start with book one I promise each book will be better as I have honed my writing skills with lots of classes and information from the net. So give it a chance and I guarantee you will be hooked after the second book, I was. Oh yeah I wrote it of course I was.