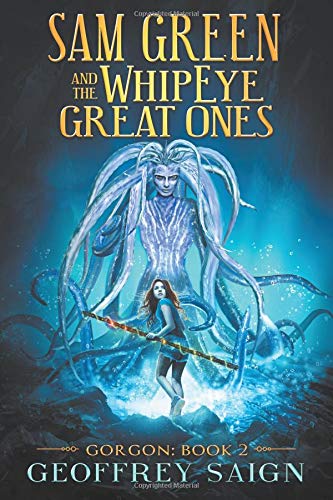 about this book: Gorgon continues the international award-winning fantasy thriller series, WhipEye Chronicles. The story begins with a battle, and ends with one, as Sam and Jake fight to save everything that is important to them. Sam and Jake now become involved in the world of Lessers--the creatures and monsters described in all human mythologies. They have 48 hours to save their poisoned parents, stop a war, and find the Jewel of KiraKu--KiraKu's main energy source. Worse,if they save their parents, KiraKu will be destroyed. Sam and Jake are pitted against each other by the evil scheming Lesser, Gorgon, and Jake gains a dangerous weapon. Dragons, mysterious creatures, and Lessers all try to force Sam and Jake in different directions---and the fate of two worlds hangs in the balance. Some will not survive...

Continuing the wildlife and nature themes of WhipEye, over 100 wildlife species are mentioned in this action adventure fantasy. Gorgon departs from WhipEye's personal story to a much larger global examination of love, nature, and intuition. This fast-paced story poses the questions; Is love just taking care of our own personal world and family, or does it mean that we should consider the good of the planet—and everyone—as a whole when deciding our actions? Is intuition just our path, or is intuition what is best for everyone?

WhipEye, 2015 International Book Award Winner (US Book News), 2015 Outstanding Children's Fiction (IAN Book of the Year Awards),and TOP CHOICE on LitPick.com, now has a sequel that expands on the magicical world of the WhipEye Chronicles.