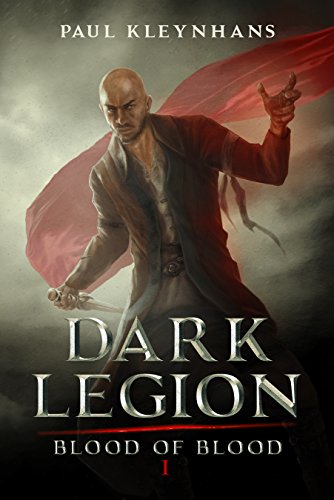 about this book: Dark Legion is a story about a broken man, fighting to restore his broken kingdom from its ashes. In the Kingdom of Ubrain, it has always been that he who wears the crown rules the land, but since the Kingdom's fall to the Empire, it has had neither King nor crown. Saul has been a slave for more than decade, but in that time he has been searching for information on the only two things he cares about: the location of his brother—the rightful King of Ubrain—and that of the crown. After more than a decade in slavery, Saul has discovered where the crown of his people is, and Dark Legion start with his escape.

He escapes with a former prisoner named Marcus, and together they head for the lakeside town of Sagemont to intercept the crown. Marcus is the former rebel leader, an excellent swordsman, and a genuinely good man. He is in all ways the opposite of Saul. Saul has lost count of the number of people he has killed. Marcus acts as his moral compass and has become a dear friend.

Together, they strive to achieve a seemingly impossible task. But their road is not a straight one, and they soon find themselves facing the Inquisition, and are caught in the middle of an unseen war as older powers work to twist the world to their own design. Saul has never been one to set easy tasks for himself, but he is determined to break the Empire's grip on his people, no matter how much blood must be spilled along the way.