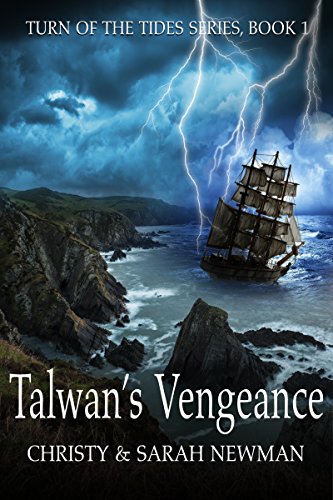 about this book: This first book in the Turn of the Tides trilogy begins the saga of two orphaned brothers who are separated when the younger is sold by the sirotište to a rich abusive slave owner. The remaining brother, Loslin, is Gifted with enormous powers which develop enough for him to lead an escape and take a pirate's ship.

His goal is to rescue his brother, West and put an end to the injustice dealt to the downtrodden, orphans, and widows by the sinister King Mathis. Along the way, he and his teen crew are pursued by an admiral of the king's navy who possesses a secret scroll which holds the brothers' destiny. Full of adventures, peril, good deeds, and surprises, Talwan's Vengeance is a fun read.

Disclaimer: It contains no sex or profanity and has some non-graphic violence.

• A truly awesome book. As a reader you really feel connected to the characters! Keep up the good work!

• Talwan's Vengeance is the story of two brothers (told in a main narrative and frequent flashbacks) who are sold into slavery in a world where magic is possible. At eighteen, the older brother wields his magic to captain a flying pirate ship with a crew of freed teenage slaves in a quest to find and rescue his brother.

• Talwan's Vengeance is a very imaginative tale, filled with many qualities that I look for in a book. I love the fantasy aspect and the thread of loyalty and honor that show up during the interactions between characters.

• Good solid story. These 2 young authors have great imaginations. Would make a great screen play. Compelling and a great read for millennials and Gen Z.