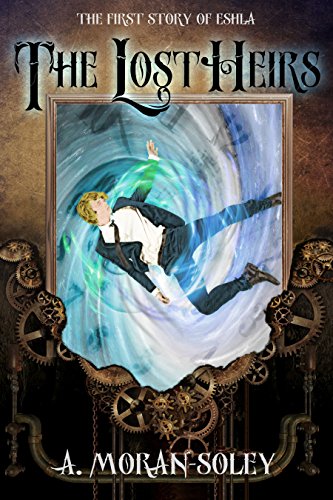 Book: The Lost Heirs - The first story of Eshla (The Eshla Adventures Book 1) by Amanda Moran-Soley

about this book: The Lost Heirs is the first of a three part adventure, with something for everyone: time travel, a fantasy world, a touch of steampunk, mystery, friendship and battles.

Originally written as middle grade fiction, it evolved into an adventure loved by all ages and particularly appealing to the young adult market. The main character, Eric, is fourteen and attends a British boarding school with his best friends: Corbin, Lydia and Rose. Life is pretty average for Eric, until one day he finds himself called into the world Eshla and presented with a seemingly impossible request. Eric's humour, and the loyalty of his friends are his greatest weapons – that and a furry blue creature from Eshla with an enormous appetite!

The original story was inspired by my son, but he went and grew up before I had the courage to finish it! Now, the second book is about to be released, and the final part of the trilogy is half way through its first draft – I found my courage and discovered that Eshla is my dream world. The perfect place to escape!

Eshla is made up of four distinct regions: Jarmuthe, Elgion, Caregon and Cedwigod, with the city of Hendref at the centre. It's a self-indulgent creation made up of my favourite things! Hendref has a steampunk feel – mainly through inventions and flying machines. The 1920's was an exciting era, and who doesn't love treehouses? Cedwigod is a combination of those two things. Elgion is inspired by Venice – one of the most beautiful places on Earth. Finally, there's a place in Derbyshire called Black Rock, which I used to climb all over in my teens – the inspiration behind Caregon. Whilst Jarmuthe is a combination of every beautiful English meadow you've ever seen.

A big part of the book involves time travel, as Eric and his friends have to go back to their boarding school in 1927, and try to blend in - you can imagine how different life was! I had a great time researching this period and learning what school life was like for the poor inmates of a twenties British boarding school!

The Lost Heirs is meant to be fun, fascinating and exciting. Key themes in the book are friendship and family, and another main one is the importance of just doing the right thing – not because of a reward or recognition, but just because you can. I hope you love this book and the characters as much as I do, and will stay with Eric to the end of his quest to release the lost heirs of Eshla.

• 'Highly recommended! A fun, fast read--would be a great read-aloud with the kids!'

• 'As another reviewer stated whilst the book is aimed at young adults I feel, much like Harry Potter, this could be the start of a series of books that will become much loved by adults and children alike.'

• 'Her writing reminded me of Harry Potter, The Chronicles of Narnia and even Dr. Seuss'

Video: The Lost Heirs by A. Moran-Soley