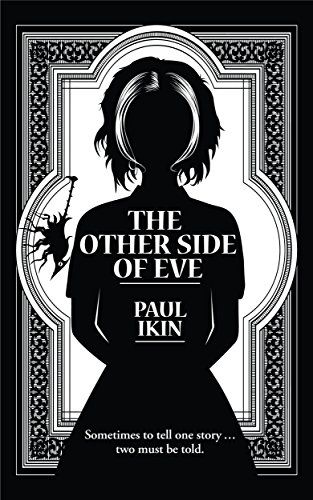 Book: The Other Side of Eve by Paul Ikin

about this book: "Sometimes to tell one story … two must be told."

The Other Side of Eve is about the two entwining tales of two protagonists, both twelve year old girls, Evelin Boots and Belleny Vera residing in different worlds.

Eve lives with her father Robin and pet cat BC on Elden Street in the small town of Yellow Tree. They all live together in a quirky and hand crafted house affectionately called the 'Plastic Palace'. Robin built their home from recycled yacht hulls, industrial fridges and plastic playground rides. Eve excels at school. She's a very bright student who suffers from a burgeoning anxiety which is starting to overwhelm her. As Eve searches for meaning in her world her mental health issues exacerbates her daily life. She seeks help through a child psychologist, Esta Green, and with the support of her close friends she courageously battles her inner demons under hypnosis.

Unbeknownst to Eve, her worsening anxieties are metaphysical and transcendental, resulting in a physical demise in a parallel world known as Mare-Marie. In this fantastical realm, the land is collapsing from an overarching evil. A necromancer witch has created a poisonous potion from the black oil that seeps from a giant, haunting rock found in the center of the main water source, the Veelin River which is the life stream of Marie-Marie.

Eve's equal in Mare-Marie, is a cursed princess named Belleny Vera. She starts her journey as a self-emposed recluse in a wealthy kingdom, her company are books, knowledge, cynicism and a cursed group of motley friends known as 'The Orphans'. Thanks to newcomer Bateau, Belleny's curious nature and quest of truth, draws her out of the castle grounds and her goal now is to conquer the witch who creates the evil engulfing the land.

The Other side of Eve is over eighty chapters long and is for a target readership for Middle Grade to YA, and fantasy novel enthusiasts who like a large and engaging whimsical tale, combined with socially relevant issues of mental health and conflict.

The author Paul Ikin, is a commercial Illustrator and Graphic Designer by trade. Accompanying over 600 pages, Paul has drawn over eighty chapter illustrations which give a design and artistic nod to monochromatic silhouette illustrations, including the cover and jacket artwork, to be enjoyed for ebook and print.

Video: The Other Side of Eve by Paul Ikin