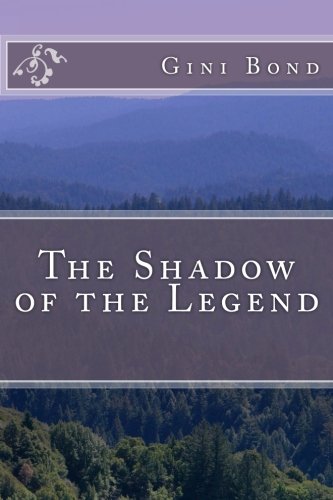 Book: The Shadow of the Legend by Gini Bond

about this book: There's nothing like dreams to inspire intriguing plots and ideas of faraway, fantastic legends. This is where The Shadow of the Legend was born--in a nighttime fancy that I had to write down so I could keep it forever and share it with everyone who would explore it with me.

A beautiful princess was taken by force to the much older chief of a rival tribe, and while trying to escape she was killed by an immense, leather-winged creature that wasn't supposed to exist. Her father's price for peace was even more impossible. There would be endless war until she returned from the dead and returned to her captors of her own free will.

Centuries later, Konar is instantly captivated by Jem, a dark-haired beauty he saw bathing in a river near his village. What really makes his heart race, however, are the scars on her body. They could only have been made by enormous talons. Could she be the one his people have been longing for--the one to put an end to the bloodshed?

Konar isn't the only one seeking her, though. Another civilization had grown up alongside his primitive race. Their queen is consumed with selling the most beautiful of her people's daughters as slaves to off world traders, and she vows to have the long-awaited princess back at any price. When the queen captures her parents, Jem has to choose between the warrior she has come to love, and her parents' lives.

• "The legend of a long-ago betrayal between two tribal cultures that can only be healed by the miraculous return of the woman who was killed during that betrayal; and the coming of the woman who, unknown to herself, is to fulfill that prophecy. The hero and heroine are engaging, courageous, and sensual." — Judith L. Grams, Author