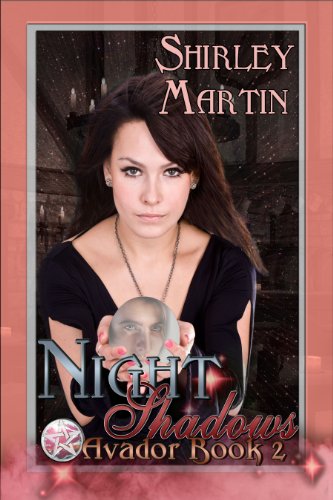 about this book: "Night Shadows" is a fantasy romance, Book II in the Avador series.

What should a young woman do when her stepfather tries to force an unwanted suitor on her? Why, she should leave home. Not wanting to marry the man her stepfather has chosen for her, Fianna flees her home and travels to a city far away. There, she meets Gaderian, a man of mystery. Forced to support herself, she works as a fortune teller in the city. She gets the surprise of her life when she meets Gaderian again.
But just who is Gaderian, and what makes him so special? Attracted to him despite herself, Fianna wishes she knew more about him.
And what about Stilo, another man she meets in the tavern? Another mystery. Wanting Fianna as his paramour, Stilo tries to lure Fianna to his bed. But will he succeed?
Angus, the suitor her father has chosen for her, won't give up in his pursuit of her.
Fianna is caught in a dangerous game in which three men desire her, each for his own reasons. But she loves only one.

I enjoy writing fantasy romance, and after writing "Night Secrets" the first book of the Avador series, I thought it would be fun to write another. Here is a snipptet of a review of the book: "Martin has written a fantastic paranormal plot that will have me on the lookout for more of her books in the months to come." Angel, Romance Junkies.