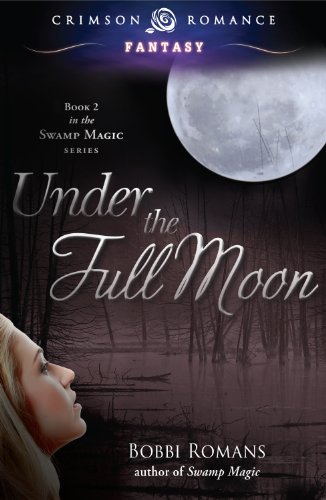 Book: Under the Full Moon by Bobbi Romans

about this book: Under the Full Moon is Book Two in the Swamp Magic and releases June 17th 2013.

A Fantasy/Paranormal Romance following the shifters cursed by the evil Society Member, Octavia.

Though won battles was won, the war against the Society rages on.

New alliances are made that test everyone in the trust department.

Under the Full Moon follows Grace and Damien as they discover new enemies, allies and new love.

Pulled into the war when she came to her niece Beth's aid, Grace knows sometimes it takes, fire to fight fire.

Having magic in her blood, Grace decides it's time they all fight back rather than wait from the sidelines for the next attack. If this means she gets to hang with Damien...all the better.

Sadly she can't get a scope on him. One minute she'd swear he was interested...the next he's disappearing back into the swamp.

She knows he's an armadillo shifter, but penetrating the armor around his heart is proving futile.

Then the worst happens, and one of their small group is kidnapped.

When pulled together the ragtag group of misfits prove quite powerful as does the magic of the swamp.

Where though deadly and mystical...love has a way of finding a home within.

Video: Under the Full Moon by Bobbi Romans