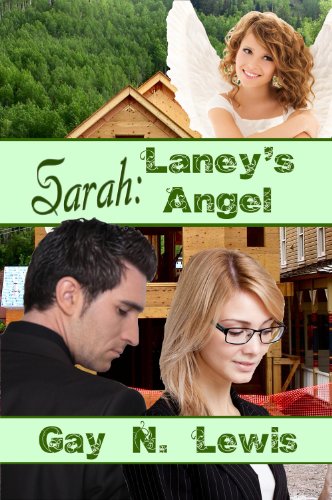 about this book: Sarah is the Lucy Ricardo from The Heavenlies.

Sarah: Laney's Angel, by Gay N. Lewis, published by Prism Book Group's Inspired Line, is about a klutzy, bumbling angel who comes to earth to help two stubborn people admit they are right for each other.

Lewis' title character, Sarah, is dyslexic, can't read maps, and is often lost. On her second assignment to Earth in Sarah: Laney's Angel, she hurries to Houston only to discover she accidentally arrived in Dallas. Tomas, the Warrior Angel reaches Houston ahead of her and wonders where she is. While Sarah's assignment is romance, Tomas must protect Laney from a stalker who wants to kill her. Will a bumbling Sarah get in his way? That charming, little angel loves red stilettos, can't fly in the same direction twice, and craves cheeseburgers. Sarah has no sentinel duties, but can Tomas succeed in his duty to protect Laney with a bumbling angel who wants to help?

Sarah is a bit of I Love Lucy, I Dream of Jeanie, and Touched by an Angel rolled into one.

Comparable to Lucy Ricardo, Sarah finds herself in madcap situations—most of them of her own making. As with Lucy, we often find the little angel wearing some crazy disguise. Remember the episode where Lucy set her fake nose on fire? Sarah hasn't done that yet, but she achieved something far worse for an angel from the Heavenlies. In Sarah: Laney's Angel, She masqueraded as a woman with the face and figure of a professional Dallas Cowboy Cheerleader. Nothing wrong with that, right? Except Sarah can't walk in heels and she fell into the lap of an unsuspecting male diner—a very non-angel thingy to do. In Sarah: A Mission of Love, she posed as a male biker wearing black leather and chains. People assumed she was with a gang of Hell's Angels. Oops! The Superiors sent her to represent The Heavenlies, not to characterize the other side. Creature appearances constantly remain a challenge for her.

In I Dream of Jeanie, Barbara Eden makes the charming character of Jeanie appear and disappear. She can create something from nothing. Sarah is gifted with those powers. Just wait till you read the chapter in Sarah: Laney's Angel where she makes a SUV appear. With no idea how to drive the huge, scary thing, another disaster emerged in the making. As with Jeanie, how should one make these items vanish without an earthly person witnessing them? Poor Dr. Bellows. In I Dream of Jeanie, he was always privy to one of Jeanie's unexplained phenomenal creations. In Sarah: Laney's Angel, a food server sees a lamb chop float in the air. Poor fellow, although cold sober at the time of sighting, he resolved to never take another drink of alcohol again for the rest of his life.

Touched by an Angel was a television series featuring angels who helped Earthlings. Each episode contained a message. At the end of the segment, Monica, the angel gifted with truth, revealed herself as an angel and then told the person that God loves them. Sarah doesn't disclose her identity, but the same notion finds its way into each book. God loves us and uses us in spite of our goof-ups.

This book is a page turner, hard to put down. Filled with suspense and a surprise ending. Even better than the author's first book, it retains all the fun, romance, inspiration and charm. Waiting for book #3.

You'd only have to enjoy this book half as much as I did to declare it a keeper! I laughed, smiled, and chuckled all the way through Sarah's antics. Yet along with the fun - a strong, serious message. [by Carlene]