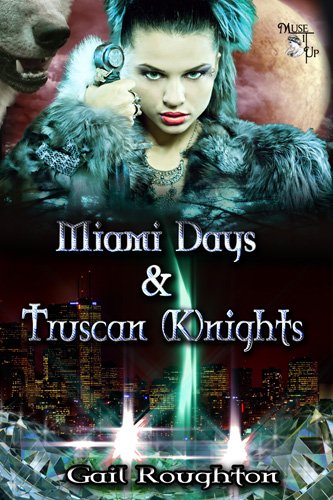 about this book: Humans are definitely not alone in the Universe. Don't take a trip to the far reaches of the galaxy to prove it, though. Go sideways. Follow corporate executive Tess Ames through the door in the Bermuda Triangle that opens every now and then, picking and choosing whom it lets through into a parallel world where the country of Trusca and her King are the last hold-outs against the Prian Empire. A medieval world that runs on magic, portents, omens, and the all-important Power Stones. You ain't in Kansas anymore!

Funny how things stick in your memory. I first came up with the idea of a parallel world when I was about five, riding home after a "date night", just my Daddy and me. A little girl's perfect night, her Daddy all to herself and the drive-in movies. (Yes, I'm that old.) The Three Stooges in Space or something similar, as I recall. I leaned back against the seat and looked out the window at the stars and thought, "What if I've got a double on another world somewhere up there?" Tess Ames doesn't have a double in that parallel world she finds herself in and that's a good thing. She gets in enough trouble all by herself. Women's Lib comes to Trusca. Sort of. And that parallel world will never be the same.