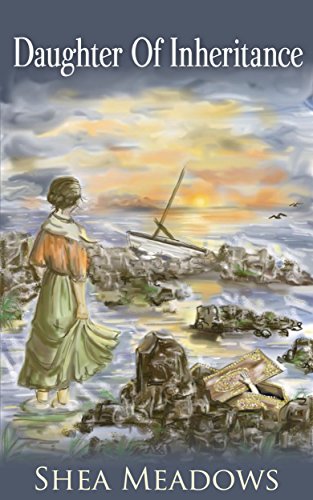 about this book: This book started long before my other indie E-books. I was playing with a new concept that merged metaphysical principles with fantasy- romantic- settings. The first scene of Daughter of Inheritance came in a dream. A woman alone on a weather-beaten island is reaching down into the sea to retrieve a small box that looks like a casket. My imagination took over from there.

Baby Fiona arrived on Mara's island, too young to communicate to her savior, but old enough to have an inner dialogue about her circumstances. She remembers her family but as no idea how she ended up floating around a stormy ocean in a box. Without any other resources to survive, she becomes the daughter of Mara and is renamed Rose. This reality went on for years, until the day a shipwrecked young man is found on the rocks off the island. Then Rose again becomes Fiona and begins a life of privilege and conspiracy.

The story went through many writes and rewrites. It was edited, trimmed down and enlarged, until it got to the story it was meant to be. All of that took about five years. Then I worked with an agent who sent it off to publishers, about the time when most publishers were cutting back on what and who they would work with. I was blending two genres, metaphysical and romance. Later on, this would take off but at the time I was pitching it, blending genres was a no-no. And I was a first time writer with only short stories to my credit.

So, the first book languished in my computer. This was before the concept of Indie writing had been popularized as E-books by Amazon. Even though it didn't look like it would sell, the characters kept bugging me to go on with the series. The land of Ranalda needed me for its survival, so I went forward with the second book in the trilogy, The Resurrectionists. That book is almost finished but of course will need the mandatory edits and rewrites before I can think of putting it up as an E-book.

In the last two years I have been focused on the York Street Series and all the details of publication and promotion. In the midst of this, I decided to have the artist who created the artwork for that series do a cover for Daughter of Inheritance, and then I published it on Amazon. There were many reads through the Kindle Unlimited and Library programs, but only a few sales. I left it floundering as I worked on promotion for my other two books.

So here's the deal. Daughter of Inheritance is a very different book. If you like fantasy romances with metaphysical elements you'll enjoy it. There are multiple characters in it, with interesting concepts and inter-relationships. You learn about the fantasy land of Ranalda through the eyes of a newly returned, unsophisticated young woman. It is not written in the same voice that I used for the other two books. There are no wars in it, but considerable areas of conflict. People who have read it have enjoyed it, even before it was an E-book. It's available for sale and on Kindle Unlimited and Library. If I have enough positive feedback, I might do a free book promotion. You can read the first chapter or so, on my sales page. It has only one review at present, so if you like it let me know.