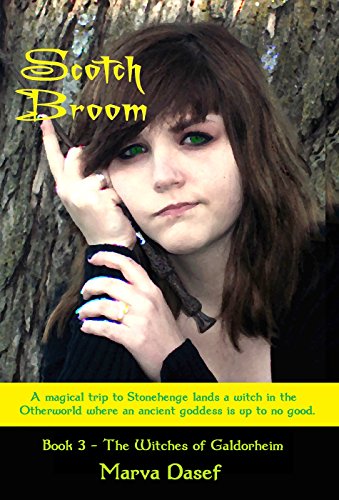 about this book: Kat's excited to take her Winter Abroad at Stonehenge during Samhein. For the first time, she'll be on her own. No brother Rune to bug her or Aunt Thordis to criticize. All she has to do is fly her magic ultralight to Scotland, deliver a few letters to the Trows in the Otherworld, then head to England.

As usual with Kat, things don't always go as planned. First, Rune shows up trying to horn in on her trip. She stomps away in anger rather than shoving her brother under the train--she really wouldn't, but she liked to think about it. She decides to head to the Otherworld to deliver the letters, but as she's walking along in a funk, she goes into the realm, but without the all-important map to the Trow's Hall.

Now lost in a boggy world nothing like the Land of Fey she envisioned, she has to find her own way to the Trows for help.

But somebody is watching her. The has-been winter goddess, Cailleach, sees an opportunity with the young witch's arrival. The hag could steal Kat's magic, so what if it killed the girl.

Rune follows after Kat, but soon has problems of his own. The siblings are headed or more like herded in the same direction. Right into the hands of the evil Cailleach.

• "I was looking forward to the third book in The Witches of Galdorheim series and didn't get disappointed. Marva Dasef once again created a wonderfully charming adventure set in a world filled with mysterious and enchanting characters." — Edith Parzefall

• "This is such a wonderful read. Ms. Dasef grabs your attention from the very first chapter, and her world-building and lovable characters keep you hooked to the last page." — E. Brenaman