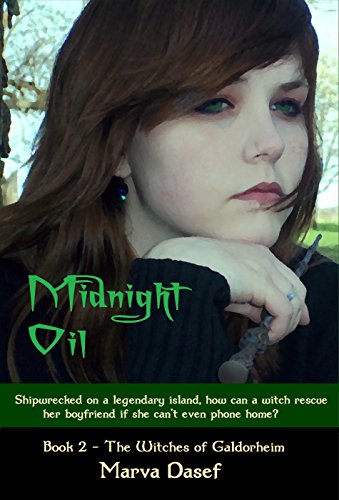 about this book: Kat solves the mystery of her "Bad Spelling" in the first book of the series. In the second book, she, her new-found grandfather, brother Rune, and changeling troll boyfriend, Andy are supposed to return her deceased father's frozen body to Siberia for a proper burial.

She's not very happy when Andy doesn't arrive at the island with her grandfather, but figures he's moved on now that he's human. Still, her father's body needs to go home, so they set out on the journey in a 30' boat. A strange storm comes up and, when Kat sees her father's ice block slipping, she grabs hold only to be thrown into the raging sea with her dad. Fortunately, his block of ice floats, so she climbs aboard.

Meanwhile, the rest of the party have lost sight of Kat and continue on to Novaya Zemlya, a barren island north of Siberia. They're captured by mutants, the victims of the Russian nuclear testing during the Cold War. While the mutant Nenets tribe holds Rune's girlfriend hostage, he and Ivansi have to find the magical Midnight Oil to cure the mutants. But they don't know where it is.

They also want to find Kat, but haven't a clue where to look for her. But Kat has resources of her own, and all the parties are headed to the same destination: a Finnish forest occupied by an evil tree spirit named Ajatar.

They've all got plenty of trouble, but adding a ticked off spirit to the story complicates everything even more.

• "I love the way the author brings in legendary monsters and her own invented creatures making me believe they are all unseen inhabitants of this world." — Sue Perkins

• "The adventures of Kat, a Wiccan, and her half-brother Rune, part vampire, that I met in BAD SPELLING continue in Author Marva Dasef's second installment of the Witches of Galdorheim Series, MIDNIGHT OIL. As much as I enjoyed the first book, this one was even more exciting." — Beverly Stowe McClure