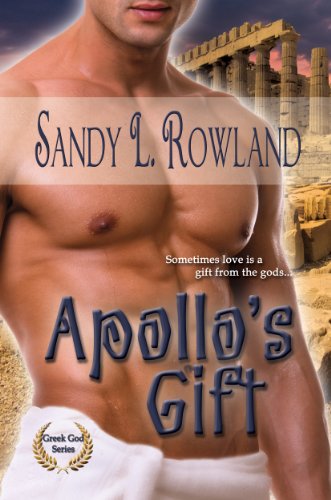 about this book: Apollo's Gift was the result of my love for mythology and asking 'what if'.

The fantasy romance is about a young woman, Cassie Priam, who has been dumped by every man she's dated. She's getting over the last failed relationship when Apollo shows up to give her a gift. It's nothing she wants, believe me.

Apollo has always had a thing for Cassandra, the doomed prophetess of Ancient Troy. She spurned him in the past, but this god doesn't give up easily. He's made a deal with Hades for her release from death and her reincarnation. But this wager is high risk. If he doesn't win Cassie's love and save the US embassy in Athens, he faces servitude in the underworld under Hades' vile grip.

Cassie struggles to be her own person and realize her self worth, something most of us strive to do. Apollo has his own weakness to overcome. Of course they must accomplish all of this together and it's a fun and dangerous ride.

I chose the cover because it's true to the feel of the story. It's a steamy tale that ties readers to ancient myth and the present.

What did I learn from writing Apollo's Gift?

Wow, more than I would have imagined going in. There are great pressures on people to be what others want. This is true of all the characters. Their success and happiness is determined by how willing they are to have faith in themselves, the future and in love. That's true for each of us. Writing Apollo's gift strengthened my own desire to claim more of my life. It's sad that we need to give ourselves permission to express who we are, but that's the first step to an authentic self and joy.

I did have to do research for this book. Some was on myth, some on current Athens, and bits on the role of the secretary of state and the US embassy. I enjoyed looking through books, talking to people and searching the Internet. I can get gobbled up doing research and never get to writing the book. But Apollo wouldn't leave me alone and I had to write.

I hope readers are entertained by Apollo's Gift, but I also want them to feel they have permission to grow beyond what they believe they must be and accept who they are.