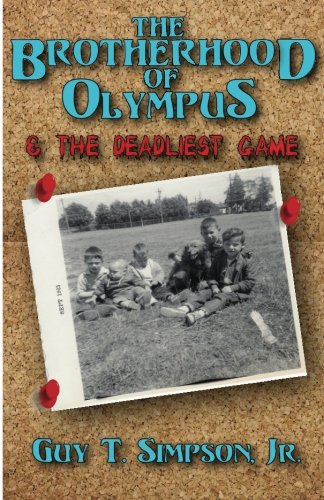 Book: The Brotherhood of Olympus and the Deadliest Game by Guy T. Simpson, Jr.

about this book: This book is based on series of true events, it is a fictional account of those events. At it's heart it is a coming of age story about five brothers and the struggles they endure after the sudden death of their uncle. Dark forces, with a deeper sinister plot, make their move upon the brothers, and use the eldest brother's need to "talk" to his dead uncle as a way to infest their family. Ultimately, it is up to the middle child, Drake Frasier, to rise to the challenge and lead his brothers in a final fight against death spirits and their grandparent's now haunted house.

It is the first in the ongoing saga of the Brotherhood of Olympus, which will span two generations, and 500 years in three different series. The first series will tell the tale of the War of the Covenant, and focuses on Drake and his Brotherhood allies as they become major players in a war they knew nothing about. The second series will tell the tales of the 'Next Generation' of the Brotherhood of Olympus, as Dayne Frasier, Isabella Frasier, Trey Frasier, Dante Frasier, and Stanley Magnison take the reigns from the elder Drake in the 21st century. The third series will focus on the older Brotherhood of Olympus that existed 500 years ago as a secret order of the Teutonic Knights, as they battle through the events leading up to the forging of the Covenant of Reason and their ultimate demise.

I hope readers of this book find it compelling and it leaves them wanting to know more about the Brotherhood and what adventures lay before them in the second book, The Brotherhood of Olympus and the Tower of Dreams.