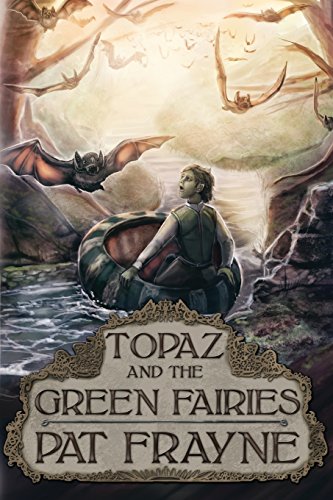 Book: Topaz and the Green Fairies by Pat Frayne

about this book: Topaz and the Green Fairies is the third book in the fast-paced fantasy adventure series about a mystical cat endowed with unique paranormal abilities. Topaz is a special breed of cat born to a legacy committed to the protection of fairies and elves and all of the other mystical beings who inhabit his world. As the last of his kind and in spite of the risks, Topaz is determined to live up to this commitment and his pledge to the ancient Code. Nevertheless, his limited conjure training puts him to a disadvantage more often than not as he continues to struggle with learning how to use his conjure power.

This tale begins in three separate locations at the same time. When the characters from these different places finally cross paths with one another the race to find help for the unfortunate Green Fairies who are marooned on a shrinking and isolated island will at last begin. The perilous, life changing events they face will keep readers engaged from beginning to end.

As children's writer, Sandra Jane Maidwell put it: "From the wise Yellow Conjure Cat to the dangerous Buckwetcher, the Black Fisher Bats, and the Spotted Gray Matoose, magic, adventure and mystery abound in this tale."

Each book was written to stand alone. This enables the reader to begin the series with any book he or she chooses.

Although Topaz and the Green Fairies was written purely for the entertainment of the reader, there is an emphasis on compassion as well as courage, loyalty and trust. I hope fans of Topaz will enjoy reading this book as much as I enjoyed writing it. My grandchildren are my greatest inspiration, and it is my dream that fans of Topaz, the Yellow Conjure Cat, will someday be inspired to write stories of their own.