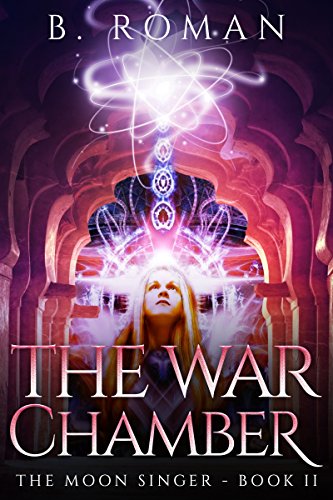 Book: The War Chamber (The Moon Singer Book 2) by B. Roman

about this book: In The War Chamber, Book Two of the Moon Singer Trilogy, deaf teen David Nickerson is feeling the full weight of his mother's death. A few months after returning home from his first amazing adventure on The Island of Darkness (as told in The Crystal Clipper), which resulted in an amazing upturn in his family's misfortunes, David is disillusioned in his mystical experiences: he is now deaf again, his sister - although out of her wheelchair - still can only walk with the aid of crutches, and his home town of Port Avalon is experiencing a crushing economic downturn. His interest in his precious crystals has waned and he mopes around without hope for his future.

A stern talking to by his beloved Aunt Dorothy, who instilled in him a belief in himself as well as the power of the special Singer crystal she unearthed and gave to him, reawakens David's desire to understand his mother's death and to communicate with her. An impassioned plea at his mother's gravesite becomes the catalyst to his second adventure, in the peculiar city of Coronadus where the citizens live a simplistic, peaceful existence following a catastrophic war and earthquake. It is here that David encounters Bianca, a revered woman who becomes a surrogate mother to him, and helps understand how his deafness and his own mother's karmic mission are intertwined. But his life becomes endangered when a power-hungry militant enemy of Bianca's discovers David's power and the existence of the supernatural clipper ship Moon Singer.

The War Chamber story combines the mystical and beautiful elements of heroic and unselfish deeds with chilling acts of betrayal, malevolence and violence, and touches on the universal subjects of ethics, morality, war and peace. But as one reviewer stated, "There were many moments when my heart felt heavy reading the book, but on the whole the book left me feeling good, happy and encased in rosy magic." It is also a gateway to the third book, The Wind Rose, David's coming of age adventure where we learn of his true destiny and the difficult choices he must make to live up to his obligations as captain of the Moon Singer.