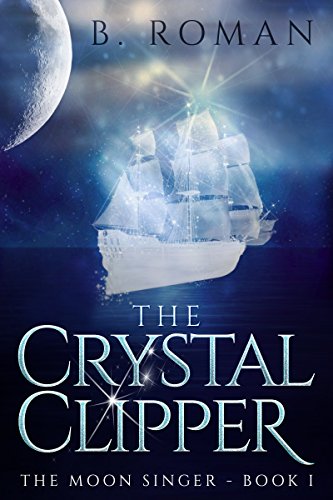 Book: The Crystal Clipper (The Moon Singer Book 1) by B. Roman

about this book: The Crystal Clipper, which is Book One of The Moon Singer Trilogy, features a deaf teen, David Nickerson, whose naive experiments with crystal power conjures an ethereal clipper ship that serves as his vehicle to amazing adventures in other times and places.

It is a contemporary fantasy that segues from real time to fantasy time, where many of the characters have dual roles in the alternate universe. I refer to this book as the "fairy tale" adventure because it encompasses many of those elements: the damsel in distress, the princess held captive in the tower by a menacing monster, and an entire island of people subjugated to the domination of an evil high priestess. It also speaks to the true life issues that many teens face today: in David's case, coming to terms with his deafness after an illness, his father's unemployment, and his sister's paralysis from the car crash that killed their mother.

What I feel is unique is the concept of a deaf "action hero" whose destiny is to perform heroic acts to save the lives of people he does not know, which in turn allows him to resolve the tragic dilemmas suffered by him and his family. The plot twist is that in these fantasy worlds David finds he can hear, while at home he is as deaf as ever, a phenomenon that is pivotal to the ongoing story line throughout the trilogy.

Importantly, there is humor, sweetness of relationships, family loyalties and unconditional love, all of which endears our hero, and all the souls he encounters, to readers. It's classified as YA, but I find that adults truly understand the metaphysical concepts and spiritual messages. The trilogy was inspired by my delving into philosophical subjects and is symbolic of my own spiritual growth.

I do hope readers will take a look at a story that does not rely on vampire sex, teen killing machines, or other dark subjects that seem so popular today, and after reading The Crystal Clipper they will want to read the other two books which come to an amazing conclusion.