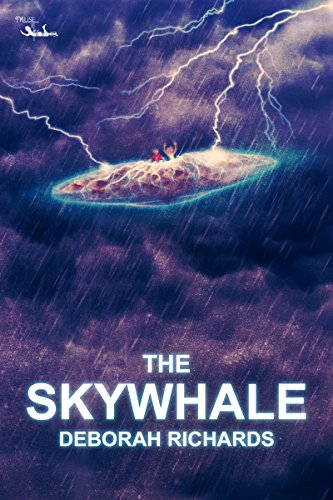 Book: The Skywhale by Deborah Richards

about this book: 'The Skywhale' is a story about Esme and her teenage brother George who accidentally find a strange creature that defies gravity by floating in the air and flying at speed without any obvious means of propulsion. It looks like a UFO but is a sentient being, half animal, half plant that is able to communicate telepathically with Esme. In fact it can communicate telepathically with animals and children but not adult humans. Unfortunately for George he is a little too old to hear it, which causes him a lot of aggravation and Esme a lot of satisfaction - since George has been bossing her about. The skywhale claims to not be an alien but says its kind has always lived on the earth, even before humans evolved.

The two youngsters fly off on the back of the skywhale and have an adventure which culminates with a 'car chase' through central London where they are pursued by police cars on the ground and military jets in the air.

My inspiration for the story came from film footage I saw of UFOs moving in and out of clouds. It was obvious to me that they were real and most likely a natural phenomenon that showed intelligence. I wondered if they could be creatures playing in the clouds and not alien space craft on a military mission. The idea gripped me and I wrote a book about it aimed at young people who delight in the unknown and the supernatural. It may appeal more to girls than boys because the youngsters in the story come to care deeply about the skywhale and worry about it being shot down by the air force or captured by the military who might do horrible experiments on it.

It only took me about four months to write because the story flowed easily but editing took at least a further six months. The young people in the story decide to call the creature a 'skywhale' because it is so huge and has diamond patterns on its skin like a fish and this is the title I chose for the book.

The front cover was designed by the Spanish illustrator Caroline Bensler. She worked with me to create an image based on a dramatic incident in the book when they fly into a thunder storm and are hit by lightning.

To conclude, 'The Skywhale' is an adventure story during which the young people interact with wild life – both natural and supernatural – and eventually put aside their sibling rivalry in the face of great danger.