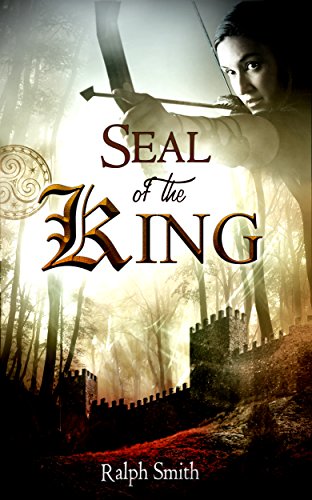 Book: Seal of the King by Ralph Smith

about this book: Seal of the King is a story about a fearless warrior Aurora and a farmer David who have a bond that connects them across time and space. They have seen glimpses of one another their entire lives, fleeting images that painted an indelible portrait of the other that lived buried deep in their hearts. As they each faced their own tragedies that picture became their source of strength and comfort in times of need.

They knew with certainty the other existed, but coming from two vastly different worlds, they never expected to meet until now. As fate brings them together across the divide that separated them, they come to find they are the ones referred to in an ancient prophecy. This prophecy foretells of their showdown with the Dark One, where through their sacrifice the tide of battle will turn.

Burdened with the weight of knowing this journey may end with their deaths they head out. As they make their way to the lair of the beast it is the love they find for one another that is their only hope of survival, but will it be enough?


• What inspired you to write this book?
I've had a number of book ideas I've been nurturing over the years, but hadn't quite been able to pull them together into something I felt did them justice. Having read the Harry Potter series by JK Rowling and the Sword of Truth Series by Terry Goodkind it suddenly came to me. I took the core elements of a few of my books and pulled them together to create this story.

I am a big fantasy and sci fi fan and love the opportunity these genres give us to explore our imaginations. I also find a compelling love story really adds to the emotional pull of a book. The only problem with a lot of good stories (the aforementioned books excluded) is that they wear us out with the will she won't she, will he won't he, or love triangle aspect of a romance.

To my mind, the kind of hero or heroine that makes a great story, are bold, selfless, brave and willing to take risks for the people they care about. That kind of character may fear the vulnerability of opening their heart just like anyone else, but when it comes down to it isn't going to play petty little games either. They are all the kind of person willing to risk everything for what they believe in.

There are plenty of opportunities for conflict that are more powerful and don't toy with the reader frustrating them.


• What would you like readers to take away from this story?
Every moment we have in life is a gift and we can either waste it worrying about what might or might not happen, or we can embrace it, savor it, and make the most of what we do have. The book is Christian themed (although I believe people of any faith or non believers can enjoy it too), and there is the aspect of destiny in it as well.

We all walk a path in life that ultimately has no road map. We can make plans but in truth we really don't know where we will end up. At the end of the day it is much more important how we live our lives than what we accomplish. It is the choices we make that define who we are.


• Who did you write this book for?
Initially I was writing this for fantasy fans from young adult to adult. I have been really thrilled though as I have had readers from 12 to 95 and every age group in between, men and women really embrace it.


• How long did it take you to write the book?
I spent about 6 months writing the book then another 6 editing and refining it. The editing was the hardest part.


• How did you come up with the title?
I have to give my wife full credit for the title. She pulled some elements from the book and came up with it.


• How did you choose this cover?
I was really fortunate that a graphic designer who worked for me loved the book and put the cover together.


• What was the hardest part of writing your book?
One of the most challenging things was deciding what to put in and what not to put in. As I wrote the story I could see it playing in my head as if I was there. I had every detail at my fingertips, the sights, sounds, smells what to leave in and what to take out becomes difficult to decide.

This was my first book and the hardest thing was finding people to give honest constructive criticism. Thankfully for my second one I have a number of people already anxiously waiting to read it for me.


• What do you want to say to your readers?
I want to thank everyone who reads my book. It is a real honor that you would spend your time with me and I truly hope you enjoy it.