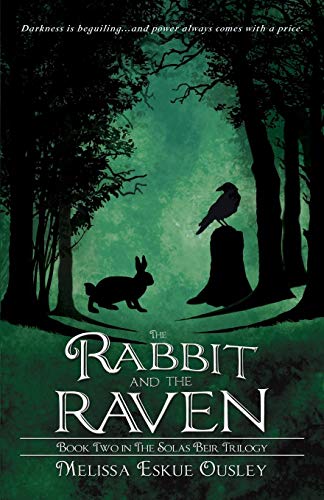 Book: The Rabbit and the Raven - Book Two in the Solas Beir Trilogy by Melissa Eskue Ousley

about this book: The Rabbit and the Raven is the second book in The Solas Beir Trilogy. The fantasy adventure began with Sign of the Throne, released September 2013.

Haunted by dreams that come true, Abby's world is turned upside-down when she meets David, the doppelgänger of the mysterious young man in her dreams. Discovering that he is the lost heir to the throne of Cai Terenmare, Abby and David must battle blood-thirsty monsters in a race to claim his birthright. The story continues in The Rabbit and the Raven as David and Abby journey to the outer regions of their magical new world, seeking the loyalty of four Oracles in an effort to win the war against the evil lord intent on stealing the young king's throne. Along the way, they will learn just how beguiling darkness can be, and that power always comes with a price.

Readers of this young adult series will meet monsters inspired by mythology. Many of the legends in our world have similar elements. In creating the world of Cai Terenmare, I imagined that these myths were referring to creatures originating from the same place, a magical parallel dimension.

Video: The Rabbit and the Raven by Melissa Eskue Ousley