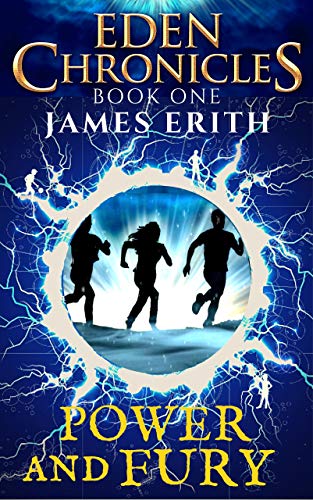 Book: The Power and The Fury (Eden Chronicles) by James Erith

about this book: A page-turning fantasy adventure story for children and adults, The Power and The Fury, draws the reader into the everyday world of three siblings whose destiny is to figure out an ancient prophecy that will change the course of mankind, for better or worse.

The idea came about when I was bitten on my neck by a spider while I slept. What interested me was that something had been dangling or climbing over my face and I was completely oblivious to it. In the next breath, I wondered if it might be something to do with the upsetting dream I'd had. I was intrigued and looked up the point of dreams only to find that, although there's a great deal of science going on, no one really knows. The seed that important dreams might actually be given was planted. Moments later my five year old daughter marched in and told me she'd heard an amazing story about Adam and Steve. I was stunned. 'Adam and Steve?' I said. Yes she replied. 'You know, Daddy, creation.' Suddenly a light bulb flickered into life.

And that gave me the idea of touching on the Creation Story in Genesis. It's the oldest story there is, an allegory of life before records, and a similar story exists in many cultures. I always thought there was a gaping hole for the millions of years between mankind's arrival on this planet and our first recorded writings – and who knows what went on. Anyway, I thought it would be good fun to start filling it in. From that moment on, I wrote like crazy and in time there will be several instalments called The Eden Chronicles. But in the beginning (geddit) there was just one book with the whole story crammed in. I loved it but various editors suggested it would make a great series. And I'm glad I have as it has given me the opportunity to flesh out characters like Kemp, Sue and Williams and bring them into the story more and expand on some of my 'loose' science.

This falls back on the fact that I was hilariously poor at science. On one occasion, in Chemistry, a friend told me to sniff a beaker full of a toxic substance. I hadn't been concentrating (typical) did as he asked and woke up hours later in hospital with a splitting headache. But I'm reasonably interested in science, particularly the amazing work happening in particle physics and genetics. There are a ton of things we feel and sense which don't really add up. That's what science tries to do, I suppose; explain 'stuff'. In the meantime, if you don't understand all those equations and symbols, all you have to do is open your mind and a whole new world is waiting. I like Daisy's explanation of it at the end of The Power and The Fury.

The Power and The Fury is set around surviving a biblical storm. We were on a family holiday in Borneo many years ago when a fantastic rain storm simply hammered down on the car we were in. It rained so hard that my parents, who were driving at the time, literally couldn't see out of the windscreen. So they had to stop and we listened in terrified awe to this cacophony belted down on us and then water started coming into the bottom of the car. Pretty hairy. Also there was a electric storm in Western Australia which was so violent it nearly made my heart stop. And then there was a monster of a storm that flattened a tent I was in on my honeymoon, but that's another story. Nature can be quite magnificent and powerful. This explains the title of the book.

Here's a synopsis of the story:

At the dawn of time, the Prophecy of Eden was designed to test mankind's strength, wisdom and skill in magic - to determine if humans were ready for their next evolutionary shift.

Thousands of years later, the Prophecy arrives in the form of a series of dreams to three unsuspecting 21st century Heirs of Eden: 13 year old Isabella and her siblings, 11 year old twins, Daisy and Archie who attend Upsall School on the edge of the North Yorkshire Moors.

As the children struggle to garner meaning from these vivid dreams, science-mad Isabella builds a weird barometer, Archie tries to understand why a curious ghost wants to join with him and Daisy, well Daisy's couldn't give a damn. All she's worried about is winning the big football final.

But as the storm brews overhead the children realise they have been given extraordinary 'gifts' of unusual power. When the fury of nature finally erupts on top of them, they realise that if they do not survive until sundown, the storm will rage for 40 days and 40 nights destroying the planet as we know it.

Can the children summon the strength, skill and luck to decipher their dreams and harness their gifts in order to survive? Even if they do, it will take a miracle. Problem is, this is just the beginning.

Part one of five, the Eden Chronicles is a thrilling new adventure series for children 11+.