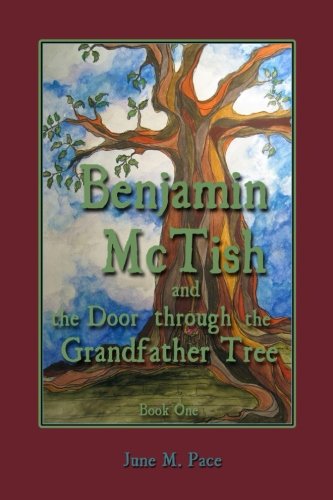 about this book: I began writing this book after I did a couple illustrations of whimsey and had painted a little boy with a tree growing out of his head. I realized I had my story. The illustrations are no longer a complete representation of the book, however, bits and pieces still remain. The book morphed into a series and has become the thing that brings me the most passion and self expression out of anything I have ever done.

These characters are current and relatable, with big personalities. They are alive with wit, humor and moxie!

When Benjamin finds an old relic of a key in his grandmother's garden shed, he could never have suspected the path of synchronistic events that would guide him, and his best mates, Annabel and Mathilda Wickcliff, (two sisters from America), on an explosive journey to a mystical land beneath an enormous tree in the Gilley Forest. Does he have the courage to follow his instincts? What answers will he find to the mysteries surrounding his life?

Benjamin McTish And The Door Through The Grandfather Tree, by June M. Pace. Written for young and old alike. This is the first book in the series.

This story is about being accountable for your actions. It's about having the courage to figure out who you are and to be confident with what you find. It shows that synchronicity can change the course of our lives, if we simply have the guts to follow it's lead.

Benjamin has inherited his grandmother's ability to "see" things. His razor sharp sixth sense affords him the courage to plunge, head first, into an amazing journey deep within the Gilley Forest, through a mystical dimensional Gateway on the old abandoned Chickering farm, (an iron clad deed has laid the farm in dormancy for 100 yrs). The Chickerings leave their world through the Gateway in 1910, and through the magic that is the dimensional world of the Gilley Forest become powerful allies to the Forest clans, as well as to the children of the prophecy.

However, this magical quest for the three friends is no simple matter, as they are placed smack in the middle of a ancient battle between the Forest clans of Gnomes known as the Set, against the ruthless Tar Vigorn, and her phantom army known as the Blunt. The ancestry foretold from the Elf of the Darmon holds a prophecy portended by the Mystic Seer Pajah Set, of the three children who would facilitate in bringing the dark Queen to immobility, all while helping the Gnomes of the Fet, the underground clans, to preserve the "Heart of the Planet".

Follow along the path to the Grandfather Tree with our three heroes and discover the magic of Coranim..the mystical land beneath the giant root tendrils of the Great Tree.

Meet Finely Heaton, the star hanger, (who feeds the Ginnies, which are subterranean creatures resembling starfish), Pips, the artist and inventor, Dunston Tibbitts, the Keeper of the Books who works in the World Library of Identity. Every being on the planet has a book dedicated to their entire lives, and mysteries are revealed. But most importantly meet Esmerelda Fet, the powerful Medicine Woman and Sage, with a brash personality to go along with her strong Irish brogue, who guides the children on their path to destiny.

Where they end up will have you sitting on the edge of your seat and clambering for the next book to pick up where this first one leaves off...and I promise...you won't be disappointed. The second book, Benjamin McTish and the Wizards of Coranim, takes off like a shot and doesn't let up for one single minute.

Trust me, the first book was about building the world of magic and introducing the main characters, and getting them where they needed to be to begin their journey of discovery. The second is all about action and power...it's an evolving gripping story that will continue to entertain for years to come.