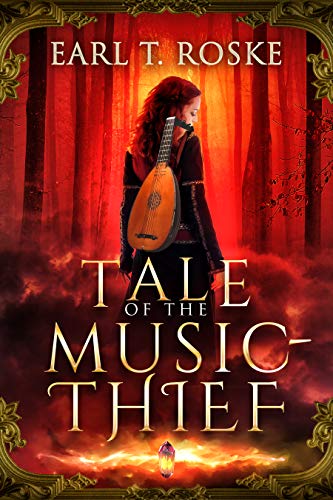 Book: Tale Of The Music-Thief by Earl T. Roske

about this book: Tale Of The Music-Thief is a fantasy adventure story. It follows a young opera singer, Allegra, as she chases after a mysterious man. This man is stealing music from Allegra's world. But he not stealing sheets of music or music crystals. Rather, he's stealing the music from the music sheets, from the music crystals, and from the minds of the people. Music is disappearing from people's minds even as they sing. One moment they are happily singing a tune they've known since childhood and then suddenly all they are left with is a vague memory of having once known a song. But the song is gone. There is a fear by some that the music may be gone forever. Other's believe it is only a sickness that will pass in time.

Allegra can't take that chance. The music she's acquired over the last ten years kept the painful memories of a lost past safely buried. But as more and more songs disappear, the old memories have begun to surface. She is afraid to confront those memories, afraid of the emotional pain they may hold. She has to find the music-thief, she has to understand why he is doing this, she has to try and stop him.

I developed the idea for Tale Of The Music-Thief after many hours of contemplation of the power of music. We can probably all agree that music has power. Music can make us proud, happy, sad, even angry, and it can stir up old memories. We are influenced by music in movies to scar us, make us nervous, make us feel joyous, and quite a few other emotions. So music has power.

Also, from the beginning of musical time, music has told stories. These might be songs that told the tales of gods or kings, they might have told the tales of heroes. Today songs tell tales of lost love, political opinions, mysterious worlds, and - once again - a wide range of other tales.

From all of that I began to imagine a world where music was the equivalent of our modern television and movie theaters. So, instead of sitting and watching a television tell a tale, they sing epic songs that tell tales. The people in this world go to taverns and inns where minstrels share new and classic songs. They populate music halls and opera houses for more embellished story telling with music. Almost everyone in the land can sing or play an instrument; it's as natural as speaking for them.

I pinned this world in a place of magic. But rather than just have magic be the workings of wizards and such, I decided that music has to have evolved, too. Like computers were once the realm of universities and banks but evolved to existing on our phones for games and calendars, I thought that magic should have similar advances. So here, in the world of Tale Of The Music-Thief, magic has become and industry and City-Along-The-Lake is their Silicon Valley.

I hoped that Tale Of The Music-Thief would appeal to a broad range of readers in much the same way that J.K. Rowling's books appealed to a wide ranging audience. Though, I didn't write the book focused on pre-teens and early teens - there are frequent references to alcoholic drinks - I do not doubt that it might have appeal for them as well. The truth is that I wrote the book for myself. I wrote a book that I wanted to read. No formulas were used. I didn't think that I would write a book like X's or Y's books. Though it is my hope that many people will find pleasure in the reading of the book, I know that it has all ready satisfied it's target audience: me.

Tale Of The Music-Thief is my first book that I've completed and published. It began as a short story, evolved into a novella, and after much reflection I realized the tale could fill a book and I allowed it to do so. I've worked on the book haphazardly over the last couple of years. Last year I made it a goal to complete the novel and get serious about publishing it. There were a few bumps along the way, but the book did get completed as I intended.

Completing a book, having something publishable, was an empowering feeling. It felt like a real accomplishment and I've already started on the next book. I have a feeling that it's like any skill, the more I work at it, the better I'll get, and it won't take nearly as long to complete the next book, and the next book, and so on.