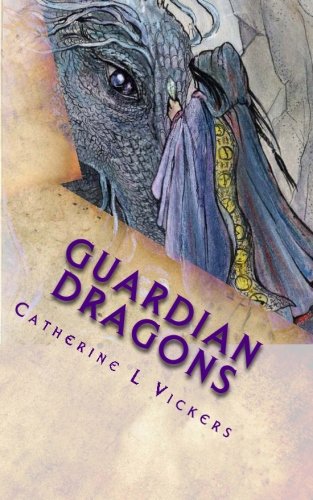 about this book: For all Fantasy Adventure fans, Guardian Dragons is part 1 of a new fantasy series set on the World of Aarabassa. It is available on Amazon (worldwide) in e-book format and paperback print.

Based on the world of Aarabassa where one half is dark and the other is in constant sunlight. A Magic Wall at the top of the mid-mountains divides the world and keeps the darker characters out of the Lightlands.

Living in the Darklands are the monshaad wraith creatures who rule with their magic and mind powers. The monshaad Emperor Morte-Bielze summons his neighbour, Lord of the vamplins. There are no loyalties between the races. Only magic keeps the Emperor in his seat.

At the other side of the Wall within the Lightlands, Rikka the hag brews a poison on her Master's instructions. She and her son journey to the Royal City of Beldroth. Once in the city Fedros cleverly secures a post of guarding one of the Princes, by using the poison to murder the soldier on this duty. Meanwhile, Rikka convinces a local village of her herb and midwifery skills. Here she feeds her Master, the Emperor, with children's souls through her evil spells.

Living in the Royal Palace is the youngest Prince Raphael, born with terrible weakness to his bones. His two older brothers love him dearly. Prince Amos is heir to the throne. Prince Leon grew up with the Head Mages daughter, Heather. The human King has been struck with grief since the birth of his youngest son, Raphael. when his wife Minah lost her life. Slowly King Alfred has been overcome with his loss and weakens as a leader.

Heather is a Changeling through her bloodline. She ventures into the sea and Changes for the very first time, into a female Huphin, with the guidance of the Huphin Prince. Whilst swimming, the dolphins become frantic and lead their sea Prince to rescue his daughter who is trapped by savaging sharks.

The Guardian Dragons and the Changeling are the only creatures who can pass through the Magic Wall that separates the Darklands from the Lightlands. The Queen Dragon overhears the vamplin Leaders sister discussing a plot by the evil monshaad Emperor to battle with the Lightlands. The dragon Queen then seeks the Ancient Mage.

Rikka is banished from the village and gains access to the palace with the help of her son, Fedros. The King's mother is impressed with Rikka's healing skills and hopes she can cure her grandson Prince Raphael, of his ills.

It has taken many years to create the world of Aarabassa and the people, creatures and cultures that live there. My research led me to understand different types of dwellings and how to mould each races culture.

My storyline began as a skeleton plot that was loose enough to be chopped and changed accordingly. My style is to approach each chapter as a unique tale. This way I will hopefully have a peak in every chapter. Of course they all have to link so they are not totally stand alone.

For me the longest part of writing is the editing, unless you can afford professional services. I re-read and re-edit my novel many, many times over. The hardest part though, I think, for any indie author is the marketing. This is where you will learn many new skills. Computer work and learning to surf the net for the multiple platforms required to promote your work. Communications, by joining many social network groups and keeping up your presence. Presentation, when you are required to showcase your work on the many blogs and sites that may feature your book. Once I am a veteran at this I hope it will all flow a little easier but for now I am still a newbie and making many a mistake.

I am very excited at the way publishing is developing. I appreciate that it opens the way for good and bad writing but it also opens doors for the inexperienced who truly desire to improve and become established authors. I believe that Amazon are also on a learning curb and will eventually create rules and policies that will overcome the saturation we see at the moment. It takes time for new ways to be accepted. It is not an easy ride for any new author who cannot be accepted through the traditional channels of publication via a publisher.

I hope some of you will read my first novel and let me have some of that all important feedback that every author needs to improve their skills. Presently I am preparing Part 2, Flight of the Changelng, ready for release in May 2013. That is when I'm not marketing Part 1.