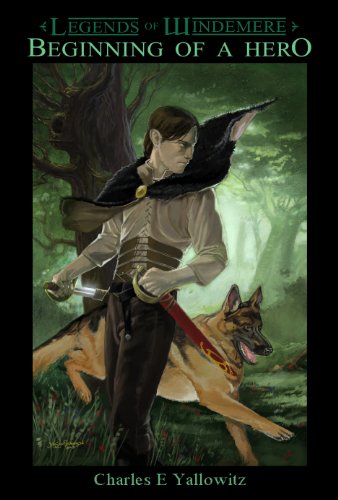 Book Review: Beginning of a Hero (Legends of Windemere Book 1) by Charles Yallowitz

about this book: This book is the first of a series that takes place in the world of Windemere. Born from a college Dungeons & Dragons game, the story follows the adventures of Luke Callindor, a young half-elven warrior.

Luke was born into a family of legendary heroes and has set out to prove that he's worthy of his names. After getting frustrated with simple tasks, he decides to do whatever it takes to earn his first adventure. This reckless determination causes him to lie to a royal messenger and be assigned to secretly protect a royal heir who is attending a nearby military academy. Unfortunately, Luke forgets to ask what the heir looks like and has to figure out a way to locate his charge. To make his life even more difficult, he learns that a demonic assassin is after the heir and has already infiltrated the academy. Luke's first adventure becomes more than he bargained for as he struggles to keep his head on his shoulders, stay out of detention, and gain some loyal friends to help him.

Filled with action, humor, and vivid characters, Beginning of a Hero is the first step into a deep world that I've spent the last 14 years creating. One of my biggest goals is to make great characters, so I hope every reader finds a character that they'd like to call one of their favorites. Enjoy.

Legends of WIndemere - An exciting ride through fantasy.

Charles E Yallowitz' book "Legends of Windemere: Beginning of a Hero" is one hell of a ride down fantasy lane. The book begins slowly, and picks up pace as you move along. Unlike most of the other books, this book entertains you more in the middle and keeps you engaged throughout. There are times when you don't want to let go of the book and your eyes keep absorbing every word, trying to take in everything!

This book, I think has given a completely different and interesting perspective to fantasy writing. I used to think of fantasy as witches and dwarfs and such stuff! The characters, plot and scenes unfold at the correct time and keep you on your toes at all times. Luke Callindor (the main character) makes you laugh, cry and enjoy as he laughs, cries and enjoys. His slight over-confidence and at the same time his cautiousness, failed to disappoint me!

As a non-fantasy reader I found it hard imagining the creatures of which I had never heard before, although after the first five or ten pages, I was at ease with the story. For fantasy readers…this book is a ten-course dinner with dessert! And yes…for non-fantasy book readers, it's time you started reading fantasy, and that you started with this book!

I feel that the story flowed with perfection. Yes, there were some gaps that could have been filled in, but then I realized that filling in those gaps wouldn't have had left any space for the reader to think. So, this is a thumbs up to the author!

A thing that I liked about this book was that, Charles had each character well-defined and UNDERLINED. No character was ever out of character, even during the most intense scene. Does it mean that the story was predictable? Hell, NO! And that's what is the USP of "Beginning of a Hero!"

Predictability: (Not counted while calculating overall rating, the lower the number, the better the book) 1/10