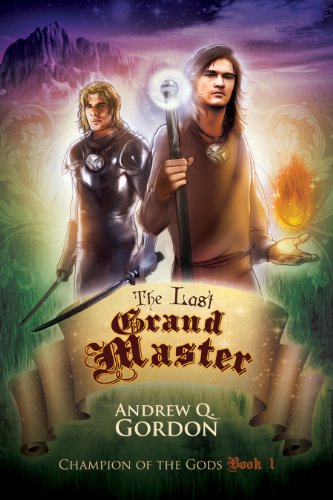 Book: The Last Grand Master (Champion of the Gods) by Andrew Q. Gordon

about this book: The Last Grand Master is the first book in a fantasy series I've titled, Champion of the Gods. It takes place on the world of Nendor, three thousand years after the last war between the gods. Having lost the first war, Neldin, god of the underworld, has spent his time licking his wounds and preparing his newest servant, Meglar, for the next round.

Meglar succeeded in striking the first blow for his master, killing most of the other powerful wizards on the continent of Ardus. Once he conquers Ardus, he will have a strong base from which to attack the rest of the world. Standing in his way is Farrell, the last grand master wizard in Ardus. Although young, especially for a wizard, Farrell has been chosen by the other gods of Nendor to oppose Meglar and their brother's attempt to conquer the world.

Farrell is directed by Honorus, lord of the gods, to assist the defenders of a city besieged by Meglar's forces and in the process meets Miceral, an immortal warrior the gods have chosen to be Farrell companion and mate. The two try to make a life together even as the threat of Meglar grows each day. But when Meglar attacks a neighbor, Farrell must decide just what he is willing to risk to fulfill his destiny as the Champion of the Gods.