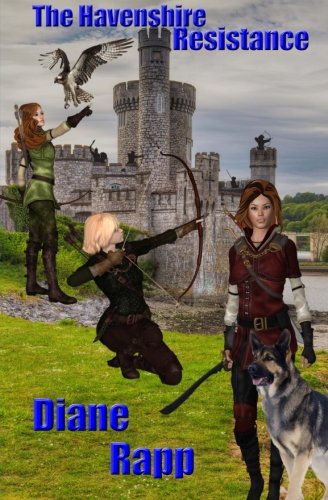 Book: The Havenshire Resistance (Heirs to the Throne - Book 2) by Diane Rapp

about this book: What is sapience? The dictionary defines the word as "wise, or attempting to appear wise or intelligent. Science fiction writers often use the word sentient to mean the same thing. Are animals intelligent and self-aware? Communication is a sign of intelligence; building things, using tools, and forming societies are other signs of intelligence. The wolves of Drako exhibit another special sign of intelligence. They preserve and learn from ancestral history by "hosting" the minds of their ancestors. These ancestors are like living computers, giving hosts real time advice. Readers learn more about "hosting" in THE HAVENSHIRE RESISTANCE,the second book of the Heirs to the Throne trilogy.

When Havenshire falls under attack from Jarrack, Krystal is forced to flee with her three young daughters. Discovering that Donovan is trapped in stasis, the clever queen devises an elaborate plan to defeat the enemy. She hides her precious daughters with trusted friends in different parts of the kingdom. She's patient, knows it will take years to build an underground army, but she needs that time for her girls to mature. Sentient wolves guard Krystal's pack, ready to provide their ancestors' wisdom and skills in the upcoming battle. Lauryn, Tessa, and Felesia are Krystal's secret weapons against Jarrack. The Resistance will need their combined powers to defeat the powerful enemy and rescue Donovan.