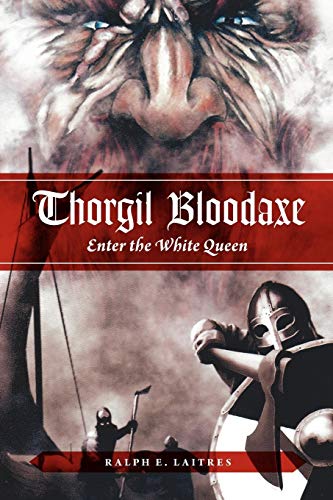 about this book: It has been said that what one may do in the past on another, may haunt them in their future. Thorgil Bloodaxe was soon to find that the old saying was very true.

His life as a wandering sell-sword was soon to change when his path crossed that of a Kalevian sorceress named Swan. She warned the Viking warrior that he was being hunted by the White Queen of Nidafjoll, the sister of Karelia, who Thorgil murdered during the Battle of Trolleboten.

Thirteen years earlier with his Jomsviking brothers-in-arms, Thorgil marched into the lands of Finnmorken to Trolleboten to put an end to the Snow Witch's terror. Thorgil almost met his wyrd at the hands of the Snow Witch when she tore the right-side of his face with her touch.
Thorgil was instructed that he must travel to the mountains of Upper Northland to find the answers as to how he may defeat the White Queen.

"Thorgil Bloodaxe, Enter the White Queen" is heavily influenced by Finnish Mythology and Norse Mythology. The world created is part reality and part fantasy. Thorgil's world is filled with warriors, guardians, sorceresses, who have to interact with those of the elder races to unravel a puzzle or to obtain an answer.