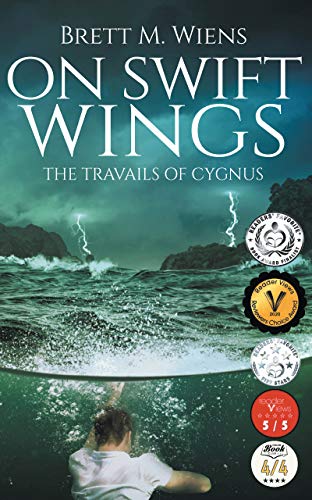 Book: On Swift Wings - The Travails of Cygnus by Brett M Wiens

about this book: On Swift Wings is a story about a young man who gets stranded after an air disaster on islands inhabited by sentient horses and feral humans, immortals, giants, sorcerers, and tiny humans. It is a story of his struggle to survive and thrive in strange and inhospitable lands.

The book was inspired, and is based off of the classic novel, Gulliver's Travels by Jonathan Swift. After reading it to my son as an infant, I realized that this 300-year old novel was due for a modern upgrade. I updated the social satire, the plot, and the way the main character interacts with the natives of the lands he encounters.

It took about three years to write, as I had two small children and a full-time job. I actually wrote the majority of the book on my phone. This presented a few challenges of its own, as it is hard to write in small discontinuous chunks. In editing, I would realize that I repeated something, but in the end I was able to clean it up.

I researched the original book in detail, lots of historic figures for the section with the necromancers, and various analyses of Gulliver's Travels and Jonathan Swift to ensure that I did justice to his work.

The title is a nod to the author of the original story, Jonathan Swift, and an acknowledgement that I was writing this on his wings. Also, aircraft are a pretty important feature, and it is a play on words, which I enjoy.

I chose this cover because it represents some of the important things in the book. Water, islands, and a struggling man in the water are pretty common themes throughout. It wasn't the original cover, which I replaced with this one upon realizing it didn't really describe the story at all.

I've learned so much writing this book that I can't really summarize it. I've tried to write a lot in my blog. I just hope that readers enjoy it, that it makes them think, and more than anything, makes them talk and debate some of the ideas I've put forward.