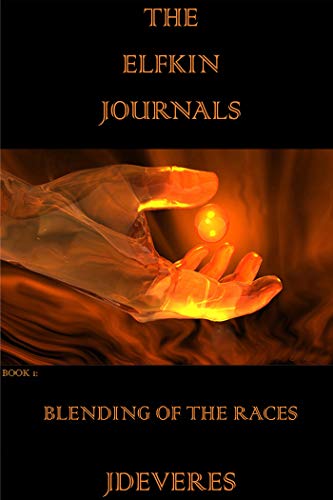 Book: The Elfkin Journals - Blending Of The Races by JDeVereS

about this book: It is my expressed opinion that, to the 98 percentile, there is no such thing as a pure fiction fantasy novel! As an author, I can give my characters pointed ears or retractable fangs... I can place them on a separate world or universe... but, in the end, I am writing about real human emotions, true human responses to various situations, actual human interactions!

"The Elfkin Journals: Blending of the Races" is a fantasy/science fiction novel that speaks to the ancient adage the "power corrupts and absolute power corrupts absolutely".

In this novel, a team of "Misfits", living in a resort compound on the third planet from a minor sun, travel to an alternate universe to end a reign of tyranny that is the result of a race with superpowers losing their human "touch".

Based on my international travels, I became fascinated with the similarities between many of the Earth's ancient myths and legends. Spending years travelling throughout Southern China and Asia, I fell in love with the sagas and the people of these lands. I was already familiar with the Western world's legends, but travelling around Asia gave me a new perspective. Eventually, the concept of a combined Elf team fighting to save 2 separate universes crystallized in my mind.

Natural wonders I have seen around the world allowed me to create vivid images of real-life settings such as Bridalveil Falls in Yosemite, Di Tian waterfalls between Viet Nam and China, The Grand Canyon in Arizona and the Chinese Grand Canyon called Tongling.

The good-hearted, open-minded, people from around the world that I have met in my life gave me the foundation for "the good guys"... the self-centered, closed-minded, people that I have encountered in life became the basis for my tyrants.

As I was constantly in a travel mode for nearly 2 years it took me that entire time to finish this novel from start to finish.

What was tough for me to write were the heroines. Sorry, but I'm one of those thick-headed guys that needs things explained to him again and again in VERY patient terms. But the "bad guys" were easy for me as I have little tolerance for small-minded people who believe there is only one "right" way to live life.. and only one right way to love! LIFE IS ABOUT GROWTH!

Hopefully, "The Elfkin Journals" will open a few minds to new thoughts and ideas.

In the end, there are a few quotes from this novel that capsulize my basic life principles.

"The only lasting treasures are those you hold in your heart - not your hands!"

"Life is a moment in eternity - Love is eternity born in this moment of Life!"

"Of all creative arts - the greatest wrought - is that of a life well-lived!"

As a former "blue-ribbon" winner in digital art contests... the cover image for my book is from one of my original works... "Hues of Creation".

I hope you enjoy this novel!