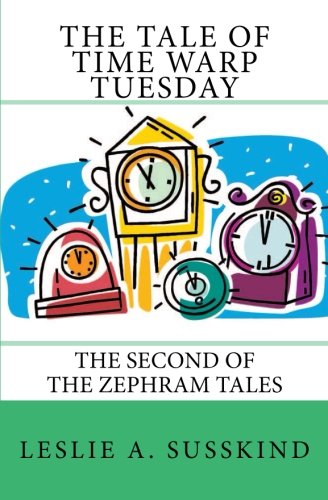 Book: The Tale of Time Warp Tuesday - The second of The Zephram Tales by Leslie A. Susskind

about this book: The Kingdom of Zephram's stuck on Tuesday – and no one knows but the Royal Quadruplets!

The second of The Zephram Tales finds the Royal Quadruplets in a sticky situation: after several weird days, they've figured out that Zephram keeps repeating the same old Tuesday, but Tom, Lizzie, Ned and Nell can't get anyone in the magical kingdom to believe them when they try to tell them what's happening .

So with all that time on their hands, they find there's always plenty to do, even when they're stuck doing the same thing every day. Sure, there's lots of trouble for the non-magical Royal Quadruplets to get into, but there's also lots of time to find out that maybe they aren't as different from the magical castle children as they thought they were.

Tom, Lizzie, Ned and Nell soon realize that it's truly up to them to get Tuesday to turn into Wednesday. Why has it happened? How can they fix it? Who is responsible? What can they do? Are they too late? The Royal Quadruplets adventures continue in The Tale of Time Warp Tuesday.