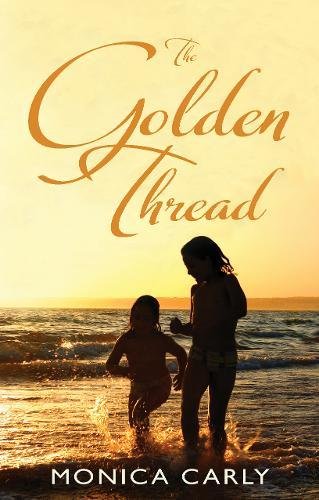 about this book: The trigger to writing 'The Golden Thread' was an overheard snatch of conversation where one party declared, almost with pride, that she hadn't spoken to her sister for years. I was horrified to think such family disharmony could exist and set about thinking up a plot about two sisters, Claudia and Maria, who were very close as they were growing up, but an event of such catastrophic occurred that it shattered the bond between them. The reader follows the separate lives of each character as they battle with the hardships life throws at them, until, after forty years, an amazing coincidence leads to the miracle of reconciliation, just before the younger sister dies of leukemia.

A wide spectrum of readers have enjoyed my book, but I think it would best be described as 'women's literary fiction'.

The spur to my current phase of creativity has been the fact that the condition of my husband, who suffers from Parkinson's Disease, has deteriorated to the point where he needs constant care. This meant my days became filled with humdrum chores and difficult medical situations, so that I needed a form of mental escape. I found it by inventing a story line, and filling it out with characters - usually late at night when I should have been catching some sleep. Only when I had developed the whole plot, worked out the motivations for why the people in my story behaved as they did, and found that the characters had become alive, did I start getting it down on the computer. It took well over a year for each of the two books I have written, before I was satisfied with the result. This was probably the hardest part - reaching the decision that it was now the best I could possibly make it.

The cover of 'The Golden Thread' shows two little girls - one older than the other - engaged in play against a golden background. Inside the front cover is a quotation from Isadora James: 'A sister is a gift to the heart, a friend to the spirit, a golden thread to the meaning of life.' As soon as I read that I knew I had my title.

I believe that books must be accurate in all respects, and as I had set one of my chapters in Oxford (UK) where the older sister was a student at an Oxford College, it was vital that the background was correct. First I read several books about Oxford, and novels that were set there. But my most fortunate stroke of luck was that my niece had been to an Oxford college, and has now made her home there. I sent her a draft of that particular chapter, and she changed one or two minor details, also adding insights of places I could use for my story.

An independent and unsolicited review was posted on Twitter on 28.12.2011 by Anne Gainsborough, who said: 'The Golden Thread is an expertly written story of love, relationships, regret and loss. Each of the characters have their own story and these are cleverly woven together to make a seamless story.'

I hope my readers will enjoy my story.