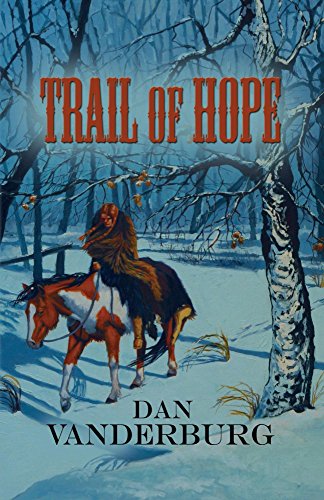 about this book: Dan Vanderburg's Texas Legacy is an epic saga spanning three books that touch the spirit of American adventure in colonial Texas as it follows two ambitious young men -- one white and one black -- the women they love and the families they raise.

The second novel in Dan Vanderburg's Texas Legacy series, Trail of Hope, introduces a new character into the Bowman and Jefferson families. The concept came from researching The Great Runaway Scrape, an actual event that occurred after the fall of the Alamo. Santa Anna's army swept through Texas following Sam Houston's army. Over twenty thousand Anglo Texans, mostly women, children and the elderly, fled their homes and farms as war refugees, sometimes only hours ahead of the devastation and death caused by the Mexican army. Dan posed a question to himself: What would happen to two youngsters if they were, due to circumstances beyond their control, left behind, alone in the frontier wilderness after all the others fled toward the border?

Andy Bristow, a thirteen-year-old boy and his seven-year-old sister Rosie suddenly find themselves alone in the Texas frontier wilderness. Andy must find a way to protect his sister in a land that Comanches roamed for centuries and is now being destroyed by the Mexican Army.

Trail of Hope is an action-packed story of the culture clashes in early Texas and a brother's love, loyalty and promises made, regardless of the odds.

Artist Debbie Grayson Lincoln was commissioned to paint the cover art. Using a friend as a model, her own horse, a tree in her back yard and a borrowed buffalo robe, Debbie captured exactly what Dan saw in his minds eye as Andy fled captivity.