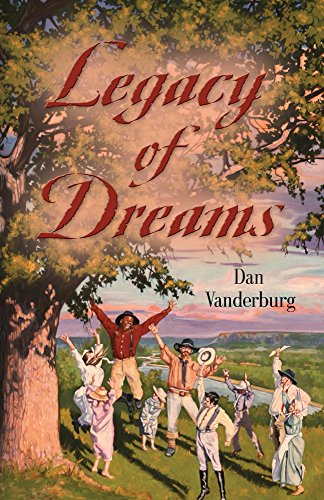 about this book: Legacy of Dreams is the first book in Dan Vanderburg's Texas Legacy family saga and takes you to the raw frontier of Texas.

When Dan began writing his first novel, Legacy of Dreams, he had no experience typing. He started with a spiral notebook and a number two pencil. It wasn't long before he invested in an early computer with word processing software and taught himself to type -- sort of. He uses a six finger method.

The initial concept for Legacy of Dreams came from a little snippet of a story from family legend. It was an interesting little piece that he thought would make a good ending to a novel. From there, he developed strong characters with their own stories to tell and dropped them and their stories into actual historical events in Texas.

After committing numerous hours researching facts about early Texas history, the first draft was finished in a little over a year, but it actually took another twenty-years to publish that novel. Career obligations got in the way until retirement. Then in 2010, after several editing passes, hiring an artist, participating in a very interesting photo-shoot for the cover art, and learning what NOT to do, Dan became an independent publisher and Legacy of Dreams was produced. Fast forward to 2016 and Dan has re-edited Legacy of Dreams and re-published a 2nd edition in both paperback and e-book.

In the spring of 1829 two young men, one white and one black, ride into the frontier of Texas to survey land for Stephen Austin's second colony. It is a land filled with political unrest, hostile Indians and backbreaking work, but unlimited opportunity. This story explores the concept of freedom at two levels: Jeff Jefferson's personal account of slavery and freedom and the story of the Texans and their struggle against the tightening noose of despotism in the Mexican government. Legacy of Dreams shows what life was really like on the Texas frontier for young families and also examines the effects of war from the very personal point of view of two Texas families who are drawn into the conflict. Will Bowman and Jeff Jefferson must not only protect their homes and families from the Comanches, they must now join the war for freedom to save Texas from the advancing Mexican army. In such turbulent times, the bond of enduring friendship and loyalty between Will and Jeff and their families inspires a legacy that ties these families together for generations.