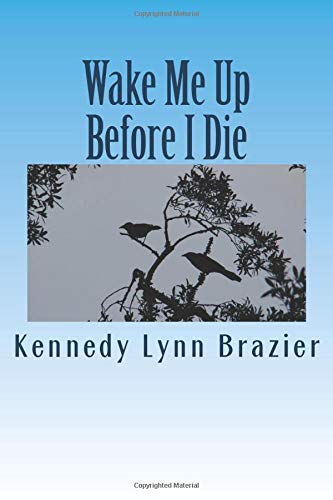 Book: Wake Me Up Before I Die - The Struggles of Johnny Lureaux to Find Purpose in a Lifetime Shadowed with Death. by Kennedy Lynne Brazier

about this book: This is the first novel in a Trilogy of the family Saga of the Lureauxs, based on true incidents in the life of Johnny Lureaux. In Book I, Death will pursue Johnny throughout the 27 years of his life, haunting a man with an unfounded purpose. As a child in Selma, AL, the 3 year old Johnny Lureaux will be given to his Grandmother, the affluent bondswomen, Isabelle Lureaux. Johnny will not only be susceptible to the blatant discrimination of the South, but he will endure the pain from his abusive and affluent Grandmother. Death initially arrives through an unannounced seizure and will continue to impose into Johnny's fluctuating life. As a young father and husband, Johnny escapes from the limited State of Alabama pursing his 2 cousins, Keys and Chugs, to the promising Chicago, IL. As apart of the African American Great Northern Migration, Johnny and his new bride face problems from the thrills and fast times the busy city offers. Yet, death continues to follow, as a careless young man over-indulges in the newly industrious Chicago. When Johnny is overwhelmed from a near death experience in the 1952 Chicago Street Car Crash he becomes a dedicated soldier in the newly integrated Armed Forces. As a highly regarded sniper in the Korean War, Deaths presence will surround him, moving with a full force towards his soul. Through every path of Johnny Lureaux's life, death seems to shadow each turn. Later in life, as he finds new love with Dottie Martin, Johnny refuses to respect the extended life that Death has granted him. When he becomes the infamous, Chicago Bandage Bandit; (a South-side renown heister of the 50's) Death and darkness begin gather as one. The doubting spirit that obscures Johnny's purpose will rise to bring death to fight a battle against the deep true spirit to meet Johnny's finality.

In Book I, of WAKE ME UP BEFORE I DIE, the final roles of Johnny Lureaux's 27 years of life, as a South-side Chicago bandit and a young father, will fall under the darkness of the deceitful life he has chosen. As the Blackfoot's song of his past echoes in the distance, death soars with the giant blackbird over him. It is final and as Johnny fights to discover the connection of his past to his presence, he will be transcended into the unity of Life and Death.

WAKE ME UP BEFORE I DIE IS A SENSATIONAL THRILL WITH GREAT INSPIRATION!