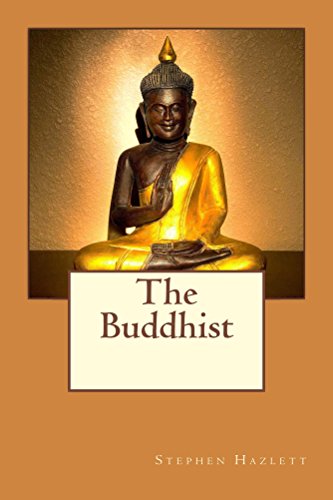 Book: The Buddhist by Stephen Hazlett

about this book: "The Buddhist" is a mainstream novel I wanted to write for years. Based on real events in my life, it's the story of someone very close to me who embraced Tibetan Buddhism, to the point that it became her whole being. After taking refuge vows, she committed herself to the teachings of the Buddha and, in the process, shed her past, including all ties to her family. She believed she would travel the Dharma road of a Buddhist for the rest of her days, free of the delusions of the normal human condition, on the path to enlightenment.

When she became ill and had nowhere else to turn, she returned to the family she'd left behind. Her struggles with her illness, never straying from her goal of becoming an enlightened soul, inspired me to learn more about her great faith. Years later, I turned her experiences and mine into this novel, "The Buddhist."

The story tells of the MacCallum family, grown apart over the years but brought back together by a life-changing event. The three main characters tell the tale, each from their own unique points of view:

• Daisy MacCallum: Born in Scotland, she immigrated to the U.S. as a young girl. All of her life she has been a searcher for something that seemed missing in her. Finally, at seventy years of age, she finds that missing something that changes everything.

• Andrew "Mac" MacCallum: Daisy's grown son hasn't seen his mother for years. Their relationship has always been a difficult one. To Mac, Daisy's odd ways never fit the mold of what a mother should be. Over time, they've grown apart, but he's always felt a bond with her, despite her strange doings.

• Jennie MacCallum: Daisy's daughter is a few years older than her brother. Always more cynical than Mac toward their mother, Jennie has long been estranged from Daisy and wants nothing to do with her.

The narrative begins with Daisy's announcement that she is living the simple life of a Buddhist at a Tibetan Buddhist monastery in Pennsylvania. Her family will never hear from her again, but she wants them to know she is happy. Mac takes the news with mixed feelings. On the one hand, he's okay with her startling announcement. Whatever makes her happy. At the same time, he privately mocks this twist in his mother's strange life, calling it "Daisy's Buddhist Thing." Mac's older sister Jennie takes the news as if it concerns someone she never knew.

Two years later, when an illness causes Daisy to leave the monastery, Mac takes her in, thinking she will get better. But her illness is worse than he thought, and he asks his sister Jennie for help. Jennie reluctantly agrees, even though Daisy hasn't been a part of her life for years. What follows is the story of a dysfunctional family finding common ground and reconciling their differences. Daisy grown children come to a new understanding of their mother, while Daisy comes to realize that the issues separating them were only their individual karmas needing to be worked out individually.

• A wonderful piece of writing that gently portrays the ultimate "aloneness" of the human experience. At once heartbreaking and hopeful. Mr. Hazlett's description of Buddhism felt authentic. The culminating pages of this book were possibly the best deathbed description that I have ever read.
— Teresa Roberts – Travel writer, Author of "Finding The Gypsy In Me"

• A well crafted novel about life, death, and family dynamics. The book deftly explores the conflict between those who see death as a loss and those who believe it is a transition.
— DaveG – Independent reviewer, Hawaii

• Buddhist fiction... who knew? Certainly worth the read. The story is more light hearted than serious, with believable characters. I was sad when I finished it, a sure sign of a worthwhile read
— Lucinda N. Brown – Independent reviewer, Indiana