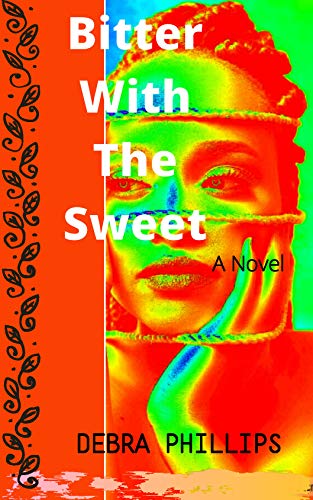 Book: Bitter With The Sweet by Debra Phillips

about this book: Bitter With The Sweet

It's been Birdette Parker's deep belief that family should stand strong and come first, but the good Lord has made a terrible mistake by placing her in the wrong family. She has done all she can to be the glue, the bank, the adviser, the mediator on down to the healer. Her life is calling and it's time to answer. She wants out!

Violence could be Betty Jean's middle name. She is truly a big, bold, and brassy woman that takes no mess from no one, especially not from Leeray, her good-for-nothing husband. Ever since Betty was the age of seven and witnessed a man beating a woman out on the street with a crowd of onlookers that did nothing to help, she vowed that she would never be that kind of weak woman. No man would ever beat her. But her struggle to keep that vow has lead her down the opposite path of being an abusive wife. Even after her first husband died under mysterious conditions after one of her beatings, the violence didn't stop. Betty doesn't believe in ghost but thinks that her dead first husband tries to contact her from time to time. Being the fearless woman that she is, she's not afraid though. She'll beat a ghost down to the ground if she must. No problem.

Bigbetty is no better in the mothering department when she treats her younger child like a princess while her oldest daughter, the one she calls 'the darkie', she treats like a stepchild. But

when that child is taken away, Bigbetty must dig deep within herself to find the love and mothering skills to get her child back.

He hates his wife; he loves his wife. He can't stand her but can't live without her.

Leeray Robanson is a man that hates change, which is one of the reasons he can't bring himself to leave the abusive marriage he shares with Bigbetty. Plus, he can't leave his two daughters with their monster of a mother. After suffering a back injury some years back, he can only earn money as a shade-tree mechanic, which puts the bulk of their financial needs on his wife. He feels trapped. Stripped of his manhood, shame clouds his days. His resent has steered him down a pay-back road. If he can't get to his wife for all the pain and suffering she has cost him, he could hurt her through her sister. This twisted way of thinking leads him to aid his up-to-no-good friends with harassing his wife's gay sister over the phone. In the beginning it's just boys being boys and having a little fun, but soon enough, that innocent fun leads to sexual assault.

Birdette Parker has always been the strong one of the three. The one most likely to accomplish her dreams and goals, but those same goals keep getting pushed farther and farther from her reach with the greed, needs and wants of her immediately family. When Wesley Whitman, the perfect man enters her life and promises her all the things she has dreamed of, she is conflicted with her emotions as to if she can truly leave her family behind. The lover gives her a deadline to decide what to do. She must make the hardest choice in her life: to leave her dysfunction family behind to pursue her dreams. Leaving her sick mother is the hardest.

hers alone. Too bad everybody don't feel that way. In fact, someone out there in the big, cold world has a problem with Pearl Parker's alternative sex life. Evidence of this begins with weekly prank calls to her house. The caller never identifies himself, and Pearl is determined not to have her buttons pushed by some sick phone stalker lurking in the dark. Pearl changes her phone number repeatedly hoping to deter the mystery caller and prankster that makes her life a living hell when the identity of the perpetrators is closer than she thinks.

The job of being mother to three head-strong daughters was never an easy one, but now, Gwen Parker is living life one day at a time. When doctors have let her down by not getting serious enough to find the source of her pain and suffering, Gwen Parker decides to take matters into her own hands by putting a bullet into her gut. This drastic measure is not to end her life, but an attempt to save it. But once she has been diagnosed with cancer, she believes that her life is about to end. She can wrap her mind around many things in life, but suffering is not one of them. Gwen brings up the possibility to her daughters of 'helping' her to slip away from living.

Sisters need to stand strong through thick and thin, even when Gwen believes that she is dying but wants to skip the "lingering to suffer part". She calls her daughters together for a special family meeting where she finds the strength to ask them to do the unthinkable. It's something that a mother should never have to ask of her children, but Gwen is convinced that if they should comply with her request, it's the ultimate show of love.

This is dysfunctional family at its best. A poignant story of lies, secrets, and family redemption, with some drama stirred in.