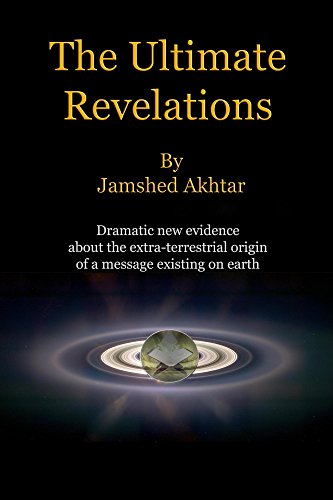 about this book: The story presented

Concurrent with a freak solar activity, a young scientist begins seeing strange and puzzling dreams of momentous events from the past. He sees an occurrence in the formation of solar system, a day in the Cretaceous period, Prophet Noah's boat being constructed, Buddha giving a sermon to a large multitude, Moses climbing the mountain to keep tryst with the mysterious fire, and child Mary's guardianship being decided in the temple. The mystic night visions end with an episode in Muhammed's life, leave the young man perturbed and intrigued, and prod him to study and collect data on metaphysical aspect of life.

Meanwhile, falling temperatures all over the world, herald the onset of an ice age. The planet in its fight for survival, tries to distribute the heat stored in oceans all over the land. Tornadoes, squalls and high velocity winds sweep the planet and add to the misery of the humanity already suffering from the energy crunch. At this crucial juncture, the young scientist gets an inspiration and presents before the world, a hypothesis about a Grand Cosmic Design...

The Design is aesthetically beautiful, breathtakingly simple, and awesome in its expanse, yet the most remarkable thing about it, is its promise of the expected arrival of a 'Message from stars' that has all the knowledge of Cosmos hidden in it…

The only weakness of the Design is that, it does not predict the time of its arrival.

Eager to find a solution of the global crisis, and realizing that a future possibility of such a 'Transmission from stars' is difficult to investigate, the young scientist, begins to probe existing sources of all such knowledge on earth.

With time, he Identifies the latest scripture as a possible candidate, and presents before the world, evidences from the historical records of its descent, its language, its peculiar time of arrival, characteristics of its recipient nation, its contents, the presence of an interpreting mechanism in it, and its collective effect on the world, over one and a half millennium period, utilizing the chaos and order tapestry of nature.

Lastly, he also analyses a mathematical argument, rectifies an anomaly in it, and suggests a key to the first coded layer of extra-terrestrial information in this transmission.

What is this book about?

The book presents a hypothesis about revealed knowledge as a global and eternal phenomenon that came initially through human channels on the planet. However, at a certain point of time, it changed its mode, owing to a built-in limiting factor in the periodic arrival of human messengers.

The limiting factor had its basis in the requirement from human messengers, the creation of faith in accountability, in an unseen life; in addition to acting as a channel for the revealed information.

To do it effectively, they were gifted with an extra-ordinary ability to influence people (charisma), and occurrence of miracles (unexplainable events or acts that seemed supernatural).

Ironically, these gifts helped the human messengers, but they also resulted in the generation of 'allegiance' to the persona of messengers, among followers, an undesirable by-product of the process.

With time and death of human messenger, when the original information suffered distortion, the 'factor of allegiance' prevented the people to realize this fact. Succeeding generation of followers always believed that what their messenger had said, was the best, though what he had really said, none had the means to recognize with certainty.

Thus, whenever a new redeemer came on the scene with a fresh guidance, the allegiance to the previous prophets obstructed the new messenger with all the disharmony, bloodshed and the ferocity of hatred at its command, thereby defeating the very purpose of guidance.

Logic dictated that to counter this factor of 'allegiance', periodic introduction of human messengers had to end and be replaced by a non-human final transmission, that could be preserved for all eternity, and which would contain all future information in coded layers, one underneath the other.

From such a Transmission, humanity was expected to extract the guidance itself, at suitable intervals.

This hypothesis and its supportive arguments were presented in a science-fiction format. The book received helpful coverage in numerous newspapers of India and UAE, when it was published. However, the lack of proper distribution at the time, inhibited its reach.

Benefits the book offers to its readers

Against an ever-expanding attack of gloom and chaos on earth, where radicalization, bigotry and misery, are feeding off on each other, and engulfing countries like a creeping Biblical curse, the book presents a research that establishes revealed knowledge as a physical phenomenon from stars.

To support this hypothesis, more than 350 arguments have been presented covering almost every aspect.

The key point of this research is that it presents falsifiable data that can be verified collectively through a scientific investigation.

What inspired me to write this book?

The inspiration was my conviction that all communities were looking at an incomplete picture of the phenomenon of revealed knowledge, like the parable of six blind men and the elephant.

Tragically, the complete picture is not visible even to Muslims, the community which is at the centre of all the chaos, and who have received the final piece of the picture puzzle. Suffering from a thousand-year-old ban on spirit of enquiry, they are caught in a time warp. Starved of fresh information, they are unable to comprehend the enormous implication of a Message, they routinely call 'Words of God'.

Who are the primary readers of this book?

My primary readers are those intellectuals, who are not burdened with prejudices and parochial views, and have a positive and un-conventional approach towards the universe and its mysteries. In fact, my target is the entire scientific world, as they are likely to understand the concept better.

How long it took to write?

'The Ultimate Revelations' took almost ten years to complete, 7 years in research and 3 years to write. I had completed this book by 1995, but managed to publish it, by 1996 only.

How did I come up with the title?

'The Ultimate Revelations' defines the contents of book, clearly and concisely. No other alternative title was ever considered. I had decided the title from the time, the basic idea of the book was formed.

Originally, the hard cover of the book was different. It showed a mysterious tree, with its branches reaching earth and other places in the universe. However, when I updated the book in 2015, I could not find the original picture and opted for a new cover.

The images for new cover have been chosen by me, and I believe the cover is attractive and represent the contents in an interesting way.

The hardest part of writing the book?

For me, writing a story was never difficult, however authoring a research based novel, on a sensitive topic like phenomenon of revealed knowledge, proved hard.

In 1984, when I began the work, the computer was neither popular nor available to me. The Internet and Google were also not there. My own library was small, and in the absence of any support from academic institutions, I had to do the research on my own.

Now, the Internet and computers have made things very easy for authors, to research, write and publish. Moreover, the book can be self-published, distributed and publicized, easily and professionally Anyone who has anything new to say, has now vast resources, available literally at his finger-tips.

Lessons learnt from writing the book

I have learnt that conviction in your idea should matter to you, and not the size of project.

A message for my readers

As an alternative source of knowledge, the revelations are supposed to bring us information that we need but do not have the rational means to acquire it. Without its help, we may 'do' or 'not do' something that might be essential for the survival of the intelligence on this planet. And, it may not be the question of our survival alone. We do not know how are we linked with rest of the Cosmos, and how are our collective actions going to affect the scheme of things from a cosmic perspective. Perhaps, unknown to us, we may already have reached a crucial point, where a concerted effort might be expected from us. Such an effort would only become possible if we become convinced about the reality of revealed knowledge.

Sunday Observer - Should the sun hiccup…

The Times of India – In Search of new meanings in Quran

The Hindu - Message from Stars

Following links present two bubbles, outlining extracts, and other information from the book

• A walk with Prophet Moses • Meeting the Exalted One