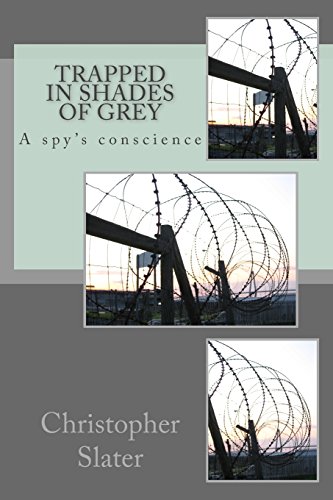 Book: Trapped in Shades of Grey by Christopher Slater

about this book: It's easy to hate the enemy, until you have to become on of them. This is the dilemma faced by Christoph Ernst when he is recruited by the United States War Department to become a deep-cover agent during World War II. Passing himself off as a German soldier is easy. Living with the knowledge that he is helping spell doom to the men that he is fighting, living, laughing, and bleeding with is hard. When the time comes to decide between his country and his conscience, which will he choose?

Trapped in Shades of Grey follows the real-life movements of the German division known as the Windhunds. As a World War II reenactor I began to study this division and was amazed at some of the things that I discovered. I told myself that there was a story there just waiting to be told. As I developed my characters more and more, I discovered that separating the "good guys" and the "bad guys" was becoming difficult. So many fell into the grey area in between. The main character, Christoph Ernst, was not only trapped in the grey uniform of the German army, but in that grey area between right and wrong. It was then that I came up with the title Trapped in Shades of Grey.

This novel is one of my proudest achievements. I often tell my students that any accomplishment, no matter how small, is worth celebrating. I hope that readers out there will help me celebrate this accomplishment by telling me what they think. Constructive criticism is what I look for the most so that I can know what I have done correctly and incorrectly before beginning work on my next novel.

Video: Trapped in Shades of Grey