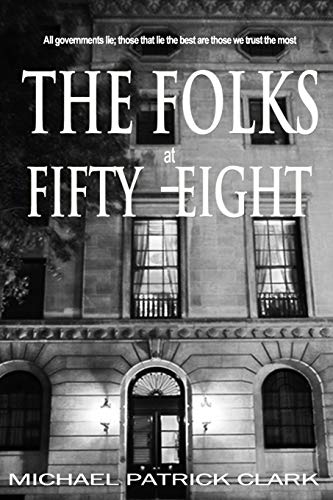 Book: The Folks at Fifty-Eight by Michael Patrick Clark

about this book: The Folks at Fifty-Eight is the first part in The Etzel Trilogy, a saga of espionage and conspiracy that views the Cold War from three viewpoints, three periods, and three locations. 1946 Washington D.C., 1952 Moscow, and 1957 London.

The Folks at Fifty-Eight kicks off the trilogy with the view from a 1946 Washington D.C. It is a Faustian tale of espionage and conspiracy that uses the disarray of Western Intelligence, the theft of atomic secrets from Los Alamos, and the adoption of dormant German spy networks, by members of the New York based Council on Foreign Relations, as factual backcloth.

The fictitious thread is provided by Gerald Hammond, a washed-up former OSS agent, and his preoccupation with a stunning young German woman. He is the exception to the rule; an incorruptible spy, whose lofty principles have brought him nothing but mediocrity and obscurity. She is the murderous and provocative daughter of a former spymaster; a femme fatale to compromise the principled man.


• What inspired you to write this book?
Because nobody, or nobody I am aware of, has done this before. Frederick Forsyth once famously said, 'There is nothing new left to write about The Cold War'. I believe he was wrong. I think so many authors have concentrated on individual spies and individual plots,
and nearly all have focussed on a physically-partitioned Germany as background. I believe the strategic-level plots and the high-level spymasters have largely been ignored. That aside I find the period fascinating.


• How did you come up with the title?
The title is a play on the street address and activities of The Council on Foreign Relations in New York City. When Hammond, the hero, meets hard-bitten NYC detective Dawid Gabriel, Gabriel refers to the inner circle at The CFR as 'The Folks at Fifty-Eight'.


• Why did you choose the cover?
The cover shows a sinister man (Hammond) with a silenced automatic, approaching 58 East 68th St. NYC. (CFR Headquarters). My wife and I worked on it. She designed the cover, and did all the creative bits. I stood and criticised. The girl shown on the spine is the mercurial
femme-fatale: Catherine Schmidt.


• What was the hardest part of writing your book?
Research was the most time-consuming, but also hugely enjoyable. Editing was the most laborious.


• Did you learn anything from writing your book, and what was it?
I learnt so much it is almost impossible to know where to begin. I learnt the craft of writing, or hope I did. I learnt so much about the political machinations of post-war Washington D.C. and I also learnt a great deal about Stalin's Moscow. I learnt about agents and publishers, and how much of a hindrance not having a 'celebrity name' is.

All-in-all The Folks at Fifty-Eight has taken me over five years of writing, research, editing, and learning. I confidently expect to complete the second part of the trilogy by this time next year, with an autobiography thrown in between now and then. I could never have achieved such a reduced timescale without 'paying my dues' on this.


• Do you have anything specific you want to say to your readers?
Yes. I have included a glossary of characters and terms at the end of the book. It is a fun exercise to try to separate real and imagined; some are obvious, some less so. It was always my intention that readers should find difficulty in defining the boundaries between fact and
fiction. If they don't want to do that, well, that's fine too. Above all enjoy reading my work, because I enjoyed writing it.