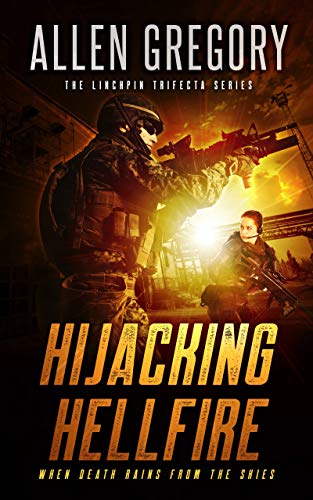 about this book: A select group of men and women, find themselves involved in a dangerous game of hide-and-seek with an embedded terror cell and a rogue Iraqi scientist in the aftermath of the second Gulf War. Racing against the clock, these seven special agents seek to recover the triggering system for a weapon that will rain death from the skies, leaving millions dead, worldwide chaos, governments crippled, and a dramatic reshuffling of the World Order.

Can this small, but elite group from a fledgling organization known as Linchpin eliminate the threat before it's too late? How will this mission determine the future of the group and shape its leadership and mission focus going forward?

Long before Flint Stryker came into the picture, the man known only as Seven, was a core member of the organization known as Linchpin. Hijacking Hellfire is a thrill ride of action and suspense, featuring a madman seeking vengeance, and a life-changing mission that tests the leadership of a group sworn to protect America from extraordinary threats.

• "Allen Gregory drops you into the middle of an exciting adventure that is believable and intriguing. The author's imagination and word craft will hold your attention, such that you'll want to continue reading." - D. Redmond

• "This story drew me into a world where duty and honor meet darkness and violence. I could not put the book down..." - Skip A.